Where is Uruguay located on the map? Uruguay is an independent nation located in South America. Check out the following images to see location of Uruguay on maps. 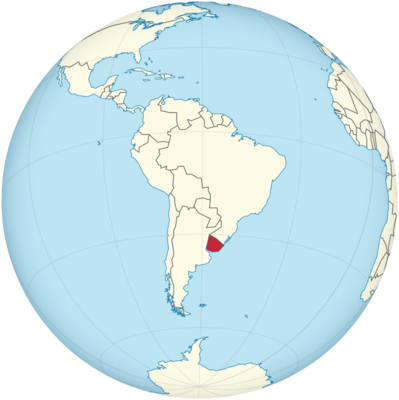 You can find Uruguay on the map in South America, on the east coast, a little below the center of the continent. Uruguay is the second smallest country in South America (after Suriname). It is about half the size of Germany. The shape of the country is reminiscent of a triangle with the tip cut off.

On this map you can see where Uruguay is.

The country of Uruguay was named after the river called Uruguay. The country’s official name is “Republic of the East of Uruguay”. The word Uruguay comes from the Indian language Guaraní. There is no complete agreement about the meaning, it can mean “river of the colorful birds”, but also river of the Urugua snail (a river snail that occurs here often).

Uruguay stands out among the countries of Latin America: It is one of the safest countries, one with the highest life expectancy, with a stable economy and a stable democracy.

Uruguay’s landscape is the pampas. This is the name given to the steppe, in which mainly grass grows, and which also occupies a large part of Argentina. So Uruguay is overall very green and also very flat. There are smaller ranges of hills like the Cuchilla Grande, but they only reach heights of around 500 meters. The highest mountain in the country, the Cerro Catedral, is also here (514 meters). It’s just a “cerro”, a hill.

The eponymous river Río Uruguay is the border river to Argentina. Río is Spanish and means river. The Río Uruguay has its source in Brazil and then flows into the Río de la Plata and the Atlantic Ocean. The Río Negro, on the other hand, flows across the country, which comes from the mountains of Brazil and flows into the Río Uruguay. It divides the country into a northern and a southern part. The Río Negro is dammed in the middle and becomes the largest lake in the country, the Rincón del Bonete.

Rain falls all year round. Most rain falls in March and April and it rains more in the north than in the south. Cold winds blow in winter (October to January) from the southwest, from the pampas. That is why they are called Pamperos. From September, however, wind can also blow from the southeast. These sudestades bring a lot of rain from the Atlantic and are frequent causes of flooding. Since there are no mountains to stop them, the winds affect the whole country.