Where is Turkey located on the map? Turkey is an independent nation located in Western Asia. Check out the following images to see location of Turkey on maps. 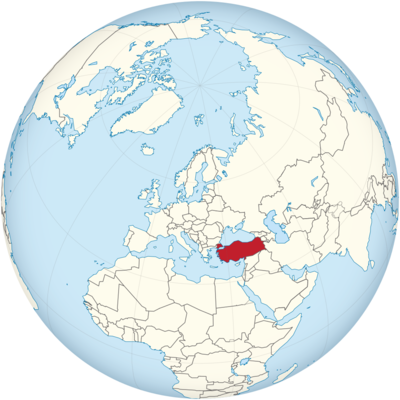 Turkey has a special location because the country stretches from Europe to Asia. So the country belongs to both continents. Most of Turkey, around 97 percent of the total area, is on the Asian continent, the remaining three percent on the European. The border of the continents runs right through the city of Istanbul.

You can find a lot of water around the country. In the north lies the Black Sea, in the west lies the Aegean Sea and in the south the Mediterranean Sea. The part of the Turkish border that borders on water is longer than that on land mass: namely 7200 kilometers. The land border has a total length of only 2648 kilometers.

In the northwest, Turkey borders on Greece and Bulgaria. Georgia, Armenia and Azerbaijan are in the northeast and Iran in the east. Iraq and Syria border Turkey in the south.

Here you can see a map of the national territory of Turkey.

The landscapes in Turkey are diverse. There are mountains, coasts and plateaus in Turkey. There are seven regions. Four of them are located on the same sea: These are the Black Sea region, the Marmara region, the Aegean region and the Mediterranean region. There are three regions in Anatolia: Central Anatolia, East Anatolia and Southeast Anatolia. You can see their location in the picture on the left.

Most of Turkey lies on the Anatolian plate. It is one of the earth plates. It borders in the east on the Eurasian plate, in the south on the Arabian plate and in the south-west on the African plate. But what does that mean now? The tectonic plates rub against each other when they shift.

Even if it is only a centimeter-sized movement, it can be gigantic. Because then earthquakes occur. Northern Turkey is a particularly endangered region. In 1999 an earthquake occurred east of Istanbul. This then even triggered a tsunami and caused severe destruction. During this earthquake, the continental plates shifted by about five meters.

The tourists who visit Turkey prefer to romp around the Mediterranean Sea. The hot Mediterranean climate prevails here and it is mostly warm and sunny. The climate in Anatolia, the Asian part of Turkey, is completely different. There the climate is continental the further you are from the coast. Summers are hot and dry, but winters are cold and snowy.