Where is Suriname located on the map? Suriname is an independent nation located in South America. Check out the following images to see location of Suriname on maps. 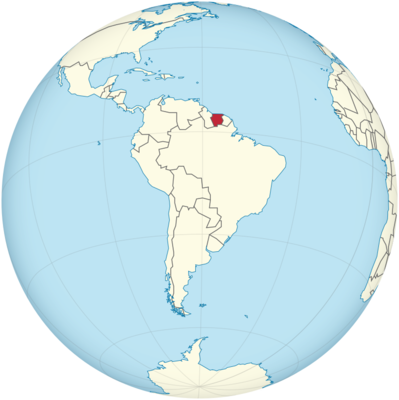 Suriname is a country in South America. It is located in the north of the continent and is the smallest country on this. In the west Suriname borders on Guyana, in the east on French Guyana, which is not a state, but belongs to France and is therefore part of the European Union ! These three “countries” are also known as the three Guiana, because Suriname used to be part of the Dutch Guiana. Suriname borders Brazil in the south and the Atlantic Ocean in the north.

Location of Suriname in South America on the map.

Suriname has a coastal plain into which several large rivers flow. The shore is swampy and there are no sandy beaches. Eight mud banks lie in front of the coast and extend around 15 kilometers into the sea.

Behind the coast, the land rises in stages and finally forms a plateau. The plateau belongs to the mountainous country of Guiana, as the whole region is called, which includes all of Suriname. You can see that on the map.

In southern Suriname, mountain ranges protrude from the Guiana Mountains. In the Wilhelminagebirge lies the highest mountain in the country, the Julianatop at 1280 meters. 13 peaks in the Wilhelminagebirge are higher than 1000 meters. The mountains are named after the Dutch Queen Wilhelmina, who ruled the country between 1890 and 1948. Julianatop honors her daughter Juliana, who was queen from 1948 to 1980. In the southeast, on the border with Brazil and French Guiana, lies the Tumuk-Humak Mountains.

Suriname is named after its longest river, the Suriname. Other rivers flow in the country towards the Atlantic, such as the Coppename and the Saramacca.

There are border disputes in the south with both Guyana and French Guiana. This is shown by the political map above with the hatched areas.

Officially, the reservoir built in the early 1960s is called Prof.-Dr.-Ir.-W.-J.-van-Blommestein-See. The engineer Willem Johan van Blommestein worked on this project. But because the name is so long, people usually speak of Brokopondo Lake after the place near which the lake is located.

The reservoir is the largest lake in the country. The Suriname River is dammed here by a 1913 meter long and 54 meter high dam. It was built between 1960 and 1964. The hydroelectric power station supplies the country with electricity. In addition, the hinterland was now easier to develop.

Suriname is in the tropics. The equator runs just south of the country. It’s always hot and humid. The average maximum temperatures in Paramaribo are 31 degrees. The average annual temperature is 27 degrees. The whole year round the temperatures hardly fluctuate, namely only between 26 and 28 degrees. The difference is greater on a day, for example when it is 22 degrees at night and 36 degrees during the day.

Because it is about the same hot all year round, there are no seasons. A distinction is made here between dry and rainy seasons. In Suriname, however, there are no pronounced dry seasons, so it rains all year round. Significantly more rain falls in May and June. September and October are the driest months.