Where is Sri Lanka located on the map? Sri Lanka is an independent nation located in Southern Asia. Check out the following images to see location of Sri Lanka on maps. 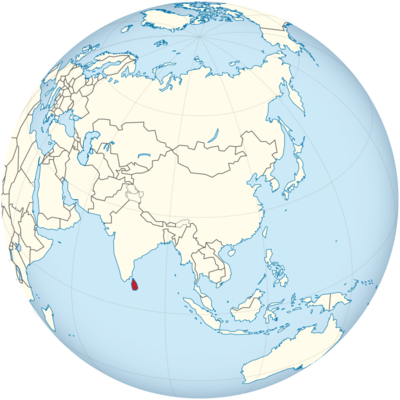 Sri Lanka is located in South Asia. On the map you can find it southeast of the Indian subcontinent in the Indian Ocean. Until 1972 the island was named Ceylon after the main island of the country. You may know the famous Ceylon tea, which was named after the island. In addition to the main island, there are another 23 islands. The country is 65,610 square kilometers and does not quite correspond to the area of ​​Bavaria.

If you look closely at Sri Lanka on the map, the shape of the island is reminiscent of a drop, some even think of a pear. From north to south it extends over 435 kilometers and from west to east over 225 kilometers. Wide sandy beaches stretch along the coasts and flat land characterizes most of the island. Sri Lanka is divided into three geographical zones with different heights.

By the way: ” Shining beautiful country” means “Sri Lanka” quite simply translated. And whoever sees pictures of this country understands the name.

Plains make up most of the landscape. The country does not reach more than 100 meters in altitude here. It is located around the central highlands, which are more in the south of the island. The third landscape is the coast, where palm trees grow.

The famous “Ceylon” tea is also grown in the central highlands. Here the mountains can reach heights of up to 2500 meters. The highest point is the Pidurutalagala, which is also known as Mount Pedro and which, at 2534 meters, is the highest point on the island.

The longest river in the country is called Mahaweli. Translated, this stands for “Great Sandy River”, which would already explain a lot. It is 335 kilometers long. The seat of government of Sri Lanka is in the city of Sri Jayawardenepura. The largest city in the country is Colombo. It is often called the “secret capital”.

The climate in Sri Lanka is tropical. But there are significant differences in the various regions. So you will find a not so hot climate in the south, as the southern part of Sri Lanka is criss-crossed by mountains. And temperatures are lower in the mountains.

In addition, there is the frequent falling monsoon rain. The monsoon winds largely determine the climate in Sri Lanka. The southwest monsoon brings heavy rain in the south and west from May to October. On the opposite east coast, however, the climate remains largely dry.

The north is also spared from the rain. However, in return, the northeast monsoon brings rain to the spared regions in the north and east in the period from November to February. Conversely, during this time it rains little in the south and west.

The temperatures on the coast and in the flat country remain largely the same at an average of 30 degrees. At night it usually doesn’t get colder than 20 degrees. The humidity is high, both during the day and at night. Only in the mountains can it get a lot cooler between November and March and the temperatures can slide below 10 degrees.

Anyone visiting Colombo will find bad air here, as in many major Asian cities, which is mainly polluted by the many tuk-tuks. These are three-wheeled little cars. And it’s loud too. The streets look unkempt, but there are also parks that are beautifully landscaped. The English colonial buildings in particular still shape the cityscape today. There are stately buildings alongside modern apartment blocks and dilapidated houses and simple huts with roofs made of corrugated iron.

Left-hand traffic is also a legacy of colonial times . The traffic management often seems strange to us. Bicycles drive or cows run on the left, then the tuk-tuks come and then there are cars or vans and next to them there are the city buses that always claim the right of way. So you will find four lanes on a street that the different vehicles (plus cows) somehow have to share. You can imagine that things are pretty tight. So all you can actually hear on the streets are horns and engine noises. There are traffic lights, but rarely. They are also superfluous because nobody stops at a traffic light anyway. So anyone who rushes into the traffic in Colombo must have good nerves or a guardian angel.

If you should ever come to Sri Lanka, you should definitely take a look at the Rock Palace of Sigiriya. This fortress has an exciting story to tell and offers great views. But to be able to enjoy this view, 1200 steps must first be overcome. The rock rises 200 meters in height.

There are the famous cloud girls here. Who exactly these cloud girls were, you don’t know, it should have been 500 once, only 18 survived the times. They were immortalized as wall paintings on the rock.

Adam’s Peak, which at 2243 meters is the fourth highest mountain in Sri Lanka, is also impressive. This mountain is popular with Buddhists, Hindus, Muslims and Christians. Here is a flat rock with a footprint that is quite impressive at 150 by 70 centimeters. This imprint is called Sri Pada.