Where is Senegal located on the map? Senegal is an independent nation located in Western Africa. Check out the following images to see location of Senegal on maps. 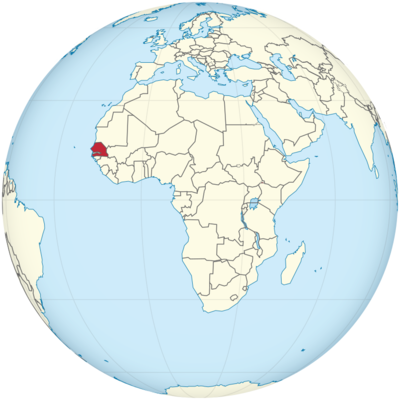 Senegal is in West Africa. In the west the country borders on the Atlantic. In the north lies Mauritania, separated by the border river Senegal. In the east lies Mali, in the south Guinea-Bissau and Guinea border the country. So there are four neighboring countries.

In addition, the country of Gambia lies trapped in Senegal like a little snake. The southern part of Senegal, the Casamance, is thereby separated. The Diola people are fighting for the independence of this part of the country.

By the way, in German you can say Senegal or “der Senegal”. It is more common to use with the item, so that’s how we use it here.

Senegal is in West Africa. Click on the map to enlarge it! Then you can also see where Gambia is

The country is rather flat and only rises slowly in the southeast. The highest mountain is here, but it doesn’t even have a name and is only 581 meters high. In the middle of the south lies the Vélingara crater. It’s a ring-shaped structure. Perhaps a meteorite struck here once, i.e. rock from space.

Senegal is the longest of the rivers. He gave the country its name and forms the border with Mauritania. The Gambia River has its source in Guinea and then flows through Senegal to Gambia. North of Gambia, the Sine and Saloum flow into the Atlantic, where they form a large delta. In the south of the country the Casamance flows, the name of which also denotes the landscape.

The largest lake, Lake Guiers, is located in the north-west of Senegal. It is fed by the Ferio River, which comes from the south. The town of Richard Toll is located in the north of the 35 kilometer long and eight kilometer wide lake. Large fields of sugar cane are irrigated with the water of the lake, which is also connected to the Senegal River by a canal.

The north of Senegal lies in the arid Sahel zone. Here rain falls only between July and October, and not very much, only around 500 milliliters. Between December and March the Harmattan, the hot and dry wind from the Sahara, blows.

The south is in the tropics. It’s hot and humid. The rainy season lasts from May to September with the peak in August and September. The monsoon blows from the south and brings a lot of moisture with it. It rains around three times as much as in the north of the country. The dry season is from December to April.

It is around 10 degrees cooler on the coast than inland. Temperatures in Dakar range from 25 to 30 degrees in summer and 17 to 25 degrees in winter. Rain only falls between July and September.