Where is Samoa located on the map? Samoa is an independent nation located in Polynesia. Check out the following images to see location of Samoa on maps. 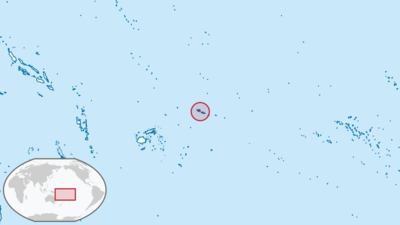 Samoa is located in the southeastern Pacific, in the middle of Polynesia. It consists of two main islands called Upolu and Savaii and two tiny islands called Apolima and Manono.

Here is an overview of the size of the islands:

Two thirds of the people live on Upolu Island. The capital of the country is called Apia and is also located on the island of Upolu. There are also some islands that are not inhabited. The length of the coast is 400 kilometers.

On the map you can see the location of the two main islands of Samoas.

The larger islands are of volcanic origin. That is why there are rugged mountains in the interior and the highest mountain in the country, Mount Silisili, reaches a height of 1858 meters. It is on the island of Savaii. There are other high mountains like Mount Mata`ga with 1714 meters, also on Savaii, and Mount Teélagei with 1617 meters. There is also a volcanic mountain on the island of Upolo, which is called Mount Rito and is 1079 meters high. The smaller islands are formed from coral reefs.

Relief representation of the islands: Here you can see the mountains, which are of volcanic origin, and the gently sloping land towards the sea.

The longest river in the country is called the Mali’oli’o River. The rivers on the islands are not long, but they carry a lot of water, creating rapids and waterfalls. Coral reefs surround the islands.

The climate is warm and humid and tropical. This means that temperatures remain largely the same throughout the year. It is about three times as much rain as here in Germany. It is also said that it rains every other day in Samoa. But most of the rain falls from November to March. It then rains a lot, especially in the mountains.

Samoa is at great risk of natural disasters. The islands are particularly threatened by the cyclones typical of this region.