Where is Rwanda located on the map? Rwanda is an independent nation located in Eastern Africa. Check out the following images to see location of Rwanda on maps. 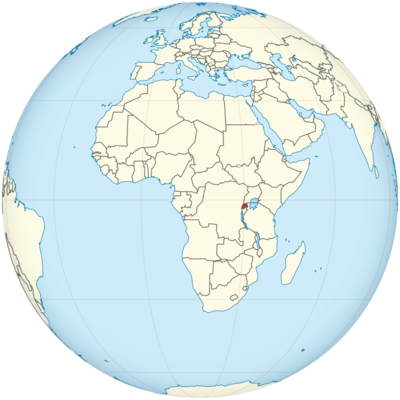 Rwanda is a landlocked country in East Africa. So the land does not border the sea. It’s a little south of the equator. Its neighboring countries are Burundi in the south, the Democratic Republic of the Congo in the west, Uganda in the north and Tanzania in the east. The word Rwanda means “the growing land”. Incidentally, in French and English it is written Rwanda.

Rwanda is also called the land of a thousand hills, because large parts of the country are crossed by a hilly plateau. The landscapes are very different, although the country with its 26,338 square kilometers is just about the size of Belgium. Or to put it another way: Rwanda fits 13 times into Germany. This also makes it one of the smallest countries in Africa.

Rwanda is shaped by three landscapes. The plateau occupies most of the country. In the southeast the land is sinking. In addition, the main watershed in Rwanda runs between the sources of the White Nile and the Congo.

Rwanda is in the east of Africa.

Here you can also see the neighboring countries and cities of Rwanda.

Even if Rwanda does not border the sea, the west of the country is determined by the Kiwu Lake, which is one of the most beautiful inland lakes in Africa. The border with the DR Congo runs through it. It is part of the East African Rift.

The highest point in Rwanda is the Karisimbi, a volcano that is not active at the moment. This belongs to a mountain range, the Virunga volcanoes in the north of the country, which like Lake Kiwu are part of the East African Rift Valley.

Translated, Karisimbi means “small white shell”. This means the snow cap that sometimes covers the mountain and looks like a shell. The land here is very fertile. The forest population is only eight percent.

Rwanda is near the equator. It helps determine the climate, but the country’s altitude has more influence. The annual average temperatures in Rwanda are 18 to 21 degrees and drop a few degrees at night. In the heights, the temperatures are lower than, for example, in the depression in the southeast.

Due to the stable temperatures, Rwanda is also known as the “Land of Eternal Spring”. In the heights there is also night frost. There are also two rainy seasons, the so-called small rainy season lasts from September to November and the big rainy season from February to May. During this time, the humidity can be as high as 80 percent. The humidity is lower in the dry season.