Where is Russia located on the map? Russia is an independent nation located in Eastern Europe. Check out the following images to see location of Russia on maps. 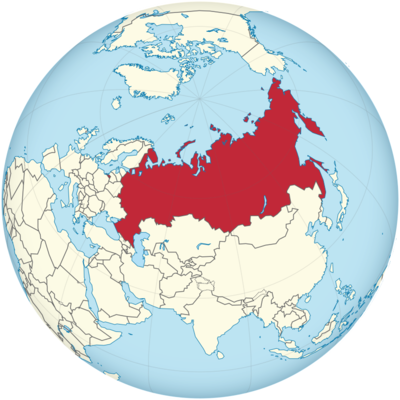 Russia is the largest country in the world. A quarter of its area is in Europe, three quarters in Asia. The Ural Mountains separate the European from the Asian part. Incidentally, the distribution of the population is exactly the opposite: three quarters of Russians live in the European part.

Here you can see where Russia is – and how big it is!

Russia also has land outside of its core area, an exclave. This is the area around the city of Kaliningrad. It shares borders with Lithuania and Poland.

Russia measures 9,000 kilometers from west to east! Those who travel through the country have to change their clock quite often, because they come through eleven time zones ! Russia also has the longest railway line in the world. It’s called the Trans-Siberian Railway. The journey from Moscow to Vladivostok takes 162 hours, that’s almost a week!

If you want to understand the vastness of Russia, you can look into which areas and landscapes it can be divided. There are a total of 85 federal subjects. This is comparable to a federal state of the Federal Republic of Germany, although there are different degrees of independence of the individual federal subjects in Russia. 21 of these subjects are republics (e.g. Dagestan, North Ossetia or Chechnya), others are referred to as Krai (region) or Oblast (area).

These 85 subjects in total are combined in larger federation circles. You can see them on the map. They are called, for example, Volga, Urals or Siberia. The capital Moscow is in the “Central Russia” federal district. There are eight of these federation circles.

Since March 2014, the Crimea has been added. From the Russian point of view, the Autonomous Republic of Crimea has since formed the ninth federal district, from the point of view of Ukraine and most other countries, Crimea continues to belong to Ukraine.

The second largest city in Russia is Saint Petersburg. Most of the time you will find the abbreviation St. Petersburg. Five million people live here. The city is on the Baltic Sea, where the Neva River meets the Baltic Sea. Peter the Great founded it in 1703 and named it after the apostle Peter, but also set a monument for himself. The city was later called Petrograd and Leningrad, before being renamed St. Petersburg again in 1991.

In addition to the division for the administration, Russia can also be divided according to its landscapes. Most of European Russia belongs to the Eastern European level. It goes to the Urals. To the east of it borders the West Siberian lowlands as far as the Yenisei River. You can see other large landscapes on the map.

On the topographic map above (that’s the one with the landscapes) you can see the green plains and the mountains. The major rivers in north-south direction are also clearly visible: Volga, Irtysh and Ob, Yenisei and Lena. In total, Russia has 120,000 rivers! By the way, the Volga is the longest river in Europe.

There are also many lakes. The largest lake in the world is the Caspian Sea, which borders Russia, but also other countries. Can you find Lake Baikal on the map ? It is located in the South Siberian Mountains and is the deepest lake in the world. At its deepest point, it is 1642 meters deep. It freezes over for months in winter. In the northwest and thus in Europe are Lake Ladoga (near St. Petersburg) and Lake Onega. They are the largest lakes in Europe.

There are also mountains. The Urals separate Europe from Asia, but are altogether only up to 2000 meters high. There are several mountains in Siberia: the East Siberian Mountains and the South Siberian Mountains, to which, for example, the Altai belongs. The Caucasus runs between the Black Sea and the Caspian Sea. In its Russian part lies the highest mountain in Russia, the Elbrus with a height of 5642 meters.

Due to the size of the country, there are also very different climatic zones in Russia. The spectrum ranges from arctic to subtropical ! Basically, the continental climate is predominant : the summers are short and warm, the winters long and cold. The further east you go, the more extreme the temperature differences between summer and winter become.

Different climatic zones can be distinguished from north to south. The islands in the Arctic Sea and parts of the coast, especially the Taimyr Peninsula, are cold deserts. They belong to the polar regions and the cold climate zone. The landscape is stony and only lichens, mosses and grasses can grow here. The ground is frozen all year round ( permafrost ground). Very few people live here. In January the average temperature is minus 30 degrees – shivering! And even in summer, temperatures only rise just above freezing point.

The temperate climate zone joins this hostile climate to the south. This is where the tundra lies. This is an open, tree-free landscape. Most of the time, the ground is permanently frozen and only thaws superficially in summer. As a result, rain cannot run off and floods and moors and swamps form. Mosses, lichens and grasses as well as dwarf shrubs grow on the tundra.

Incidentally, in eastern Siberia, in Oymyakon and in neighboring Verkhoyansk, the coldest temperature has ever been measured in inhabited places on earth: minus 67.8 degrees! In summer it can get up to 30 degrees here!

The further south you get in Russia, the more the actual tundra becomes a forest tundra : here and there trees grow, especially conifers such as pines or spruces. The forest tundra is the transition to the taiga.

The taiga runs in a wide belt around the earth. They are also called boreal coniferous forests. In the northern areas of the taiga, the ground is also permanently frozen and turns into swampy areas in early summer. Firs, pines and spruces grow in the taiga, larches in the east of Siberia, and deciduous trees such as birches and aspens to the south.

The taiga joins the steppe further south. In the photo you can see the Eurasian steppe belt in red. Most of the year it is very dry here. However, for a few months of the year it is humid, then it rains and the rivers now carry water. The forest becomes less and less towards the south (forest steppe) and then disappears completely. In the steppe there are mainly grasses.

Monsoon climate in the southeast

The monsoon climate prevails in the southeast. The summers are warm and it rains a lot. The winters, however, are rather dry. The monsoon forest with deciduous trees is predominant.

Subtropical on the Black Sea

On the Black Sea, in the very south-west of Russia, there is even a subtropical climate. However, that’s only a very small part of the country. It’s much warmer here than in the rest of the country. There is dense deciduous forest.