Where is Peru located on the map? Peru is an independent nation located in South America. Check out the following images to see location of Peru on maps. 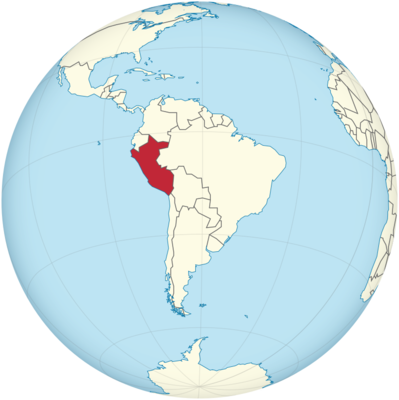 Peru is in the west of South America. The country name comes from the Indian language Quechua and means “lushness”. Peru borders clockwise with Ecuador, Colombia, Brazil, Bolivia, and Chile. To the west lies the Pacific. Peru is the third largest country in South America after Brazil and Argentina. It is the fourth largest country in terms of population, because Colombia is home to even more people, although it is slightly smaller than Peru. Peru is located in the southern hemisphere of the world.

Location of Peru in South America on the map.

The Andes, a mountain range, run through the country from north to south. Peru, along with Ecuador, Bolivia and Chile, is one of the Andean countries. The great Inca empire was on their territory from the 15th century . So there are still many things in common among the Indians who speak Quechua and build their houses with mud bricks.

There are three natural areas in Peru: the coast in the west, the mountains (Sierra, the Andes) in the middle and the Selva (forest, the lowlands) in the east.

The coastal region takes up only 11 percent of the country’s area. Still, most of the cities are on the coast. Because the Humboldt Current brings very cold water here, it also cools the air and prevents rain clouds from forming. This means that the land here is very dry.

Especially south of Lima, which is roughly in the middle of the coastal region of Peru, hardly any rain falls. The further south you go, the drier and more desert-like it becomes. The Atacama Desert begins on the border with Chile. It is one of the driest landscapes on earth! In some places it doesn’t rain for decades. The land is fertile where rivers cut it. People have settled here and built cities. The length of the entire coast is 2400 kilometers!

The Andes are a long mountain range that runs through the whole of western South America. They also run through Peru in a north-south direction, in three mountain ranges that are interrupted by long valleys. On the other hand, several rivers cut across the mountains and flow to the Pacific or towards the rainforest.

Further north, the Andes are lower. There are many páramos here, a landscape that is typical for the entire Andes, where it is tropical and humid and at the same time cool.

Towards the south the Andes get wider, as you can see on the map above. Here is the Ubinas volcano, which is still active. Here the mountains also flatten to form a plateau, the Altiplano. This extends from Lake Titicaca far south in Bolivia. It’s quite cool and dry here. This type of landscape and altitude is called Puna. The most famous city in Peru in the Andes is Cusco. From there it is not far to the famous Inca ruined city of Machu Picchu.

Rainforest and Cloud Forest: The Selva

The Andes merge on their eastern slopes into tropical mountain forest (cloud forest). It then becomes tropical rainforest in the lowlands. There are many lakes, rivers and swamps here. The forest is so dense that the rivers are the only arteries. Peru is almost 60 percent covered by forest.

Many rivers have their source in the Andes. They flow either towards the Pacific or towards the Amazon, i.e. to the east. These headwaters of the Amazon include the Río Apurímac, Río Mantaro and Río Ene, which in turn become the Río Ucayali. It flows together with the Río Marañón and forms the Amazon. The Amazon thus begins in Peru.

Lake Titicaca is not only the most famous lake in Peru, but also the largest high mountain lake on earth. It lies on the border with Bolivia – the border runs through the lake.

The name Titicaca, which sounds funny to us, was originally just the name of an island in the lake. It is there that the first Inca is said to have climbed down over a rock. This rock looked like a puma head: titi means puma and karka means rock. So that was the Puma Rock. So first the island and then the whole lake got the name.

On the Peruvian side, the islands of Amantaní and Taquile lie in the lake. The Quechua people on Taquile are known for their special weaving skills. There are also the floating reed islands of the Urus.

A secret waterfall: the Gocta

There are some waterfalls in Peru. The Gocta waterfall is a very special one. Not only is it one of the highest waterfalls on earth with a height of 771 meters, it was only discovered in 2002. The people in Peru who knew him kept him a secret because they were afraid of a curse. Since the Gocta lies in a rocky and inaccessible area, it remained secret for so long. It is named after the village to which it is closest.

Peru’s three landscapes also differ in their own climate. On the coast it is very dry, in the south there is even a desert climate. It gets very cold here at night (up to minus 15 degrees) and very hot during the day (around 30 degrees).

It’s cool in the mountains – the cooler the higher you go. The highest peaks are covered in snow all year round. At an altitude of 3300 meters, the mean annual temperature is 11 degrees.

In the rainforest in the east of the country, however, the mean annual temperature is 26 degrees! The temperatures hardly fluctuate over the year. The temperature differences on a day are greater than the fluctuations within a year. This is also called the time of day climate. So there are no seasons here either.