Where is Panama located on the map? Panama is an independent nation located in North America. Check out the following images to see location of Panama on maps. 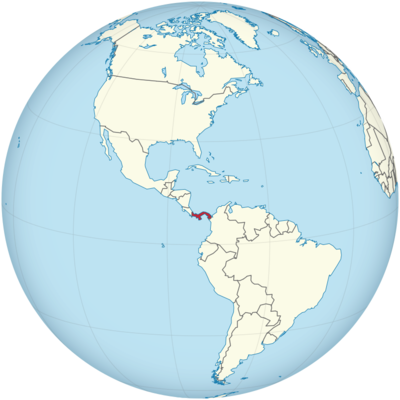 Panama is the southernmost country in Central America and thus borders on South America. It is at the narrowest point of the land bridge. With its elongated curved shape, it is itself reminiscent of a bridge. Panama borders Costa Rica to the west and Colombia to the east. The north of the country lies on the Caribbean Sea and thus on the Atlantic. The south is on the Pacific.

Panama is located in Central America and borders on South America!

In the middle of the country, the Panama Canal connects the Atlantic with the Pacific. Here is the narrowest point in the country. Since the opening of the Panama Canal in 1914, ships have been able to save the long trip around the southern tip of South America.

You can also find the Panama Canal on the map.

Azuero Peninsula and Gulf of Panama

In addition to the pearl islands in the Gulf of Panama, there is also the island of Coiba in the Pacific. It is Panama’s largest island and has been declared a national park with its neighboring islands. They are in the Gulf of Chiriquí.

The province of Bocas del Toro is located in the northwest in the Caribbean Sea, which belongs to the Atlantic. That means “mouths of the bull”. Numerous islands belong to it. The largest island among them is Colón Island. Further to the east there are other islands such as Isla Diablo (Diablo Island) or Isla Blas (Blas Island).

The west of Panama is divided by a central mountain range. This mountain range is the Cordillera de Talamanca, it comes from Costa Rica. Not far from the border is Panama’s highest mountain, Volcán Barú (Volcano Baru, 3477 meters). To the east of the Panama Canal, the land becomes lower. The mountain range runs parallel to the Caribbean coast at a height of about 700 meters.

In the southeast there is a rainforest area that is difficult to access. It’s called Darién. Colombian guerrillas and drug dealers are making this area unsafe and taking hostages. The inaccessibility and the violence, but also resistance from nature conservationists and the indigenous people living here, have meant that the Panamericana is interrupted at this point. This is a road that otherwise runs through all of North and South America.

There are almost 500 rivers in Panama. Most are rather small, have their source in the mountains and then flow towards the sea. The longest river in the country is the Río Chucunaque in the southeast (Darién) with a length of 231 kilometers. It flows into the Río Tuira, the widest river, which in turn flows into the Pacific. The Río Chagres flows in the middle of the country. It is dammed twice, which generates electricity. Two reservoirs, Lake Gatun and Lake Alajuela, were created in this way. Gatun Lake is part of the Panama Canal.

The climate is tropical and dominated by the sea. It’s hot, humid and often foggy. It is about consistently warm all year round. The annual average temperature is 27 degrees. Only in the mountains does it get cooler.

So there are no seasons. However, a distinction is made between a rainy season and a dry season. The rainy season lasts from May to January and is therefore quite long. The dry season is from February to April. On the Caribbean coast, where the trade wind brings clouds with it, it rains a lot more overall – often more than twice as much. The rainy season is also longer than on the Pacific coast in the south of the country. Panama is just south of the hurricanebelt and is therefore less endangered by such violent cyclones.