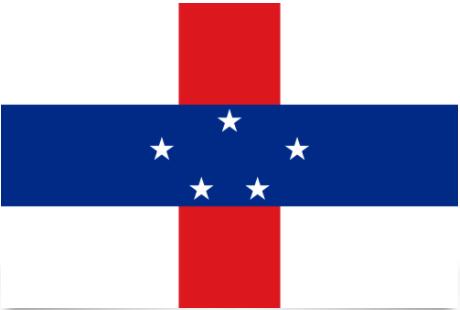 The Netherlands Antilles consists of two Caribbean archipelagos. The largest consists of Curaçao at 444 km2 and Bonaire, 288 km2, located off the coast of Venezuela, and known by the name “The Dutch Sotavento” or “ABC Islands”. The smallest group is composed of three smaller volcanic islands: Saint Eustatius, 21 km2, Saba, 13 km 2, and the southern part of St. Maarten, 34 km2– the northern part belongs to the French island of Guadelupe. They are known by the name “S-islands”, or “The Dutch Barlovento”, although they are in fact part of Sotavento in the Little Antilles archipelago. In general, the climate is tropical, moderated by the maritime location. Agriculture not very widespread. On the other hand, there is a Venezuelan oil refinery in Curaçao, one of the largest in the world. Coastal stretches have suffered significantly during economic development, with widespread pollution of the land as a consequence. Here, Curaçao’s problems must be described as the most serious.

The People: The majority of the population is descended from the African slaves. In addition, there are Caribbean Indians and descendants of Europeans and Asians.

Language: Dutch is the official language. The most widely used spoken language – in Curacao and Bonaire – is papiamento, a local dialect derived from Spanish, Dutch, Portuguese, English and certain African languages. At Saint Eustatius, Saba and St. Maarten is English the dominant language, but Spanish is also spoken.