Where is Mozambique located on the map? Mozambique is an independent nation located in Eastern Africa. Check out the following images to see location of Mozambique on maps. 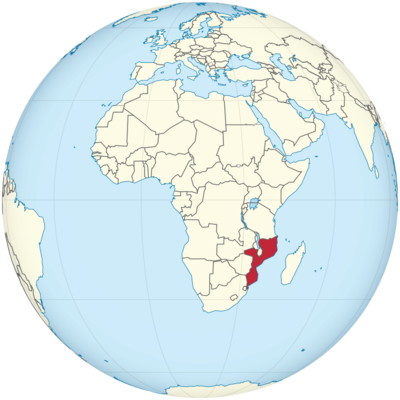 Mozambique is located in Southeast Africa by the sea, the Indian Ocean. If you look across the sea from Mozambique, you look in the direction of Madagascar.

The capital of the country is called Maputo. The second largest city in the country is Beira. Mozambique is divided into eleven provinces and borders with six states. From north to south these are: Tanzania, Malawi, Zambia, Zimbabwe, South Africa and Swaziland.

Here you can see the location of Mozambique on the African continent. Opposite Mozambique is the island of Madagascar.

Mozambique is has an area of 801,590 square kilometers. That is more than twice the size of Germany. The coast extends over a length of 2795 kilometers. To the north of the Zambezi River, which flows into the Indian Ocean in Mozambique, steep and flat stretches of coast alternate. To the south of the Zambezi there are many lagoons, but also dune landscapes and deep bays.

The lowlands merge into highlands to the north and west. The highest mountain in Mozambique is called Monte Binga, is 2,436 meters high and is located on the border with neighboring Zimbabwe.

Mozambique is a very water-rich country. The border with Tanzania is formed by the 1100 km long Rovuma River . The largest river in South Africa, the Zambezi, runs through the middle of the country. Another important river is the Maputo, which is called the same as the capital of the country and flows in the south of Mozambique.

The climate is tropical. Much of the country consists of savannah. There is a wet season and a dry season. The rainy season lasts from November to April and most of the annual rainfall occurs during this time. Mostly it’s muggy and hot.