Where is Malawi located on the map? Malawi is an independent nation located in Eastern Africa. Check out the following images to see location of Malawi on maps. 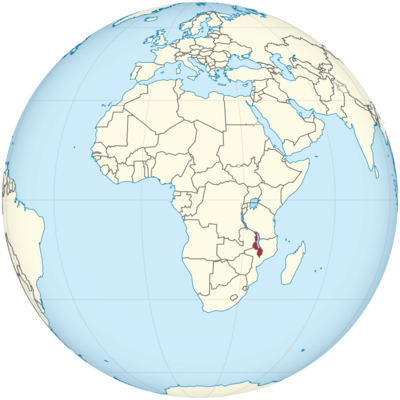 Do you know the singer Madonna? She has two adopted children and they come from Malawi. This is in Southeast Africa and otherwise rarely makes the headlines in newspapers and magazines. But when Madonna traveled there in 2014, everyone reported about it. However, they reported more about the famous rich singer than about the still very poor African country. Malawi is one of the least developed countries on earth. We tell you something about the country here!

What else is there that is exciting to tell about Malawi besides the fact that a singer traveled here and started aid projects?

Here you can see where Malawi is. The East African Rift Valley runs through Lake Malawi, which you can also see.

Malawi borders Tanzania to the north and northeast, Mozambique to the east, south and southwest, and Zambia to the west.

Malawi is a pretty narrow country, you can see that on the map. It stretches over 850 kilometers from north to south, but is only 160 kilometers wide at its widest point.

Two islands in Lake Malawi also belong to Malawi, although they are actually in the waters of Mozambique. Their names are Chizumulu and Likoma.

Malawi lies in the East African Rift Valley. This rift valley extends from Mozambique in the south of the continent to Ethiopia in the north and is constantly widening. So it forms a wide valley in the countries through which it runs. The earth’s crust of Africa, which is several kilometers thick, has torn there. This creates elongated cuts. Africa will at some point split in two and a new sea will emerge between these parts. But that will probably take a few million years! Geologists believe that the African continent is sinking further and further because of the expansion. What is still land today will one day be below sea level and be washed over by the sea.

Malawi is a landlocked country, so it has no access to the sea. But to a gigantic lake, the third largest lake in all of Africa. Just like the country, it’s called: Lake Malawi. Lake Malawi is also the ninth largest lake in the whole world. The border with Tanzania and Mozambique runs through the lake. The entire west and south of the lake is in Malawi.

Malawi is located in the tropical climate zone. Since the country stretches so far from north to south, the climate is very different depending on the region. It rains on average more in the north than in the south.

The temperatures differ little in the north and south and depend more on the altitude. It’s noticeably cooler in the mountains than in the lower elevations. You will notice that with us when you go into the mountains.

It is not that warm in Malawi in the period from May to August, and from August to November it becomes very hot. In the highlands the temperatures are then 18 to 22 degrees, in the lower regions around 25 degrees. It gets warmest in the months when it rains. Here the humidity rises to 100 percent, which is extremely humid and hard for children to bear. There is also a rainy season that lasts from November to April.