Where is Luxembourg located on the map? Luxembourg is an independent nation located in Western Europe. Check out the following images to see location of Luxembourg on maps. 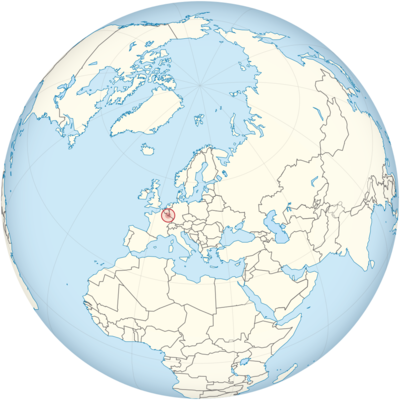 Luxembourg is located in Central Europe, on the border with Western Europe. It borders Belgium to the west and Germany to the east. In the south is France. Luxembourg does not have access to the sea. It is one of the smaller states in Europe. The total area of ​​the country is 2586 square kilometers.

Together with Belgium and the Netherlands, Luxembourg forms the Benelux countries. The word is made up of the first letters of the countries. We work closely together politically and economically.

Luxembourg is located in the west of Central Europe.

On the map you can see that the north of Luxembourg is covered by mountains. They are part of the Ardennes, which stretch from Belgium to Luxembourg. The Luxembourgers call the area Ösling. The Ösling is about 400 to 500 meters high. There are plateaus and deep valleys. Luxembourg’s highest mountain is located in the Ösling, but at 560 meters it is more of a hill. His name is Kneiff.

The south of the country is called Gutland. Gutland covers 68 percent of the national territory. The land here is lower and is mainly used for agriculture because it is very fertile. More people live here than in the north. Not only the capital Luxembourg is located here, but also the next larger towns Esch an der Alzette, Differdange and Dudelange. In the east, the river Moselle borders the Gutland, which here also forms the border with Germany.

The name Luxembourg is probably derived from Lützelburg, which means “small castle”. It was built in 963 by the Count of the Ardennes, Siegfried. Luxembourg is a Grand Duchy – the last in the world.

The longest river in Luxembourg is the Sauer with a total of 173 kilometers. It flows through the Ösling with many windings and finally flows into the Moselle. Tributaries of the Sauer are the Alzette, Our and Prüm. You can cycle on the Sauer and paddle canoes on it.

In Luxembourg the winters are mild and the summers moderately warm. The average annual temperature is 9 degrees. In the more mountainous north it rains more often than in the south. January is the coldest month and July is the warmest.