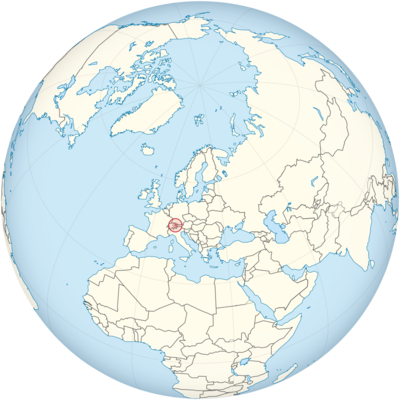 Liechtenstein lies in a four-country corner, it has borders with Germany, Austria and Switzerland. If you look at Liechtenstein on the map, you will find it in the heart of Europe. Liechtenstein is a principality and lies directly on the Rhine. The Rhine is, even if only 27 kilometers long, the longest and most important river in Liechtenstein and at the same time forms the border with Switzerland. The Rhine has its source in Switzerland and flows into the sea after 1,230 kilometers in the Netherlands.

There is only one lake in Liechtenstein and that is called the Gampriner See. This is a natural lake. There are also other lakes, but these are reservoirs that are primarily used to generate electricity.

The largest extension of the country is 24.6 kilometers in length and 12.4 kilometers in width. Around 35 percent of the land is forest, around 16 percent meadows and pasture land, and 27 percent is used for agriculture, mainly for growing wine and corn.

About half of the country is in the mountains, namely in the central Alps. Incidentally, Liechtenstein is the only country located entirely in the Alps. The highest mountain in Liechtenstein is called Grauspitz and reaches a height of 2599 meters. Incidentally, the Grauspitz has two peaks: the Hintergrauspitz, which is 2574 meters high, and the Vordergrauspitz, which is 2599 meters high. Other high mountains are the Schwarzhorn, the Naafkopf or the Falknis. These are all over 2500 meters high.

Like Switzerland, Liechtenstein is a landlocked country that has no sea borders. Incidentally, with a size of 160 square kilometers, it is also the sixth smallest state in the world and the smallest German-speaking state. Because it is so small it is one of the so-called dwarf states. Only five states are smaller. By the way, Berlin is five and a half times the size of Liechtenstein.

Here you can see where Liechtenstein is.

In Liechtenstein, people pay very little taxes, which is why the country is often called a tax haven or tax haven. In Liechtenstein there is neither an airport nor a port and not even its own motorway. The motorway runs along the border in Switzerland and there are five different exits to Liechtenstein. Liechtenstein also does not have its own currency, but uses the Swiss franc.

Gutenberg Castle is a castle from the High Middle Ages. It is located on a 70 meter high rock in the south of Liechtenstein. However, this building can only be viewed from the outside, as the castle is privately owned.

The village Malbun is a well known and popular winter resort especially for families. He is completely focused on family tourism.

It is also worth visiting a well-known falconry, the Galina Falconry. Here you can watch the falcons hunt.

The foehn is typical for Liechtenstein. This warm wind is common. In Liechtenstein, it rains very little on average. In summer it can often get very dry and hot for weeks.

There are winters with a lot of snow, but also winters in which it hardly snows at all. Due to the strong foehn, the temperatures can be around 15 degrees even in winter.

The Swiss and Vorarlberg mountains offer protection against the cold air of the Atlantic and the polar air. This protects the country so that wine can even be grown in Liechtenstein. In winter it usually doesn’t get colder than -15 degrees and in summer the thermometer likes to reach between 20 and 28 degrees, although it can also get hotter.