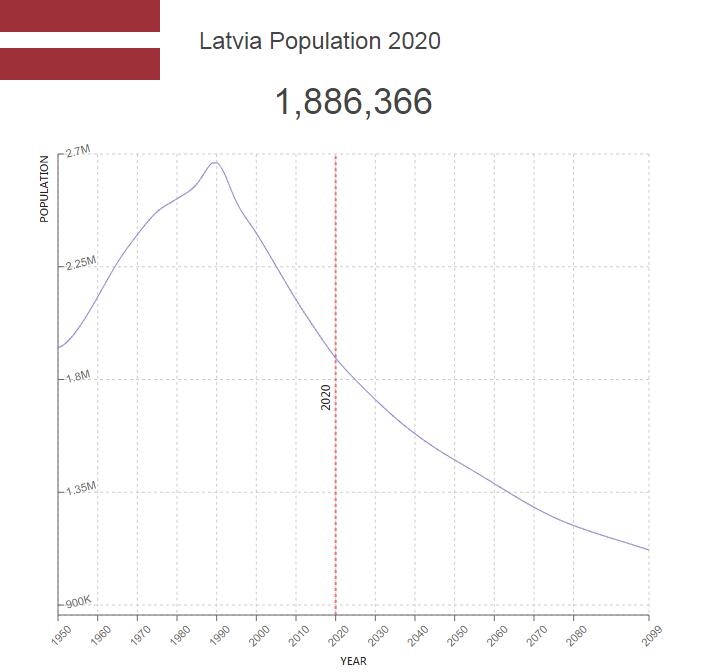 Latvia has been subject to other countries for much of its history. Following the separation from the Soviet Union in 1991, the country has approached the West and changed its economic system. Despite political shifts and economic disparities among the population, Latvia has experienced high economic growth in recent years.

By 2020, the population of Latvia was estimated to be about 1.88 million residents. Life expectancy at birth is 80 years for women and 70 years for men.

In 1939, Latvia had a population composition of 76 percent Latvians, 12 percent Russians, 5 percent Jews and 3.5 percent Germans. At the 1989 census, the proportion of Latvians had declined sharply (52 percent Latvians) and the proportion of Russians had increased (34 percent). In 2008, 58 percent were Latvians and 29 percent Russians, and in 2018, 62 percent were Latvians and 25 percent Russians. In several of the cities, about half of the residents are Russians. In addition come Belarusians (3 percent), Ukrainians, Poles (both 2 percent) and Lithuanians (1 percent). There has been controversy over the treatment of the country’s Russian and other non-Latvian residents. Following a decision in parliament, these were rendered stateless, but the decision faced strong reactions, including from Russia and the EU. The decision was subsequently changed.

About 68 percent of the population lives in cities (2020). Most important is the capital Riga. Significant port cities are Liepāja (Libau) and Ventspils (Windau), inland villages are Jelgava (Mitau) and Daugavpils (Dvinsk, Dünaburg).

Population of Latvia by Year (Historical)

Major Cities in Latvia by Population

The official language is Latvian, which is the mother tongue for well over half of the population. The Russian-speaking minority makes up about 33 percent of the population (2011). The Finno-Ugric language livi, which has been spoken along the coastal strip in Kurland, is now dying out.

About 75 percent are Christians, of whom 36 percent are Protestants (most belong to the Evangelical Lutheran Church, but there are also Baptists, Pentecostals, Adventists and Methodists), about 20 percent are Catholics, and 19 percent are Orthodox Christians. The Latvian Orthodox Church is independent, but has strong ties to the Moscow Patriarchate. About 24 percent are considered non-religious.

Latvia has traditionally been Lutheran since the Reformation, while Slavic immigrants have belonged to the Russian Orthodox Church. After Latvia was occupied by the Soviet Union in 1940, many churches were closed, and priests were imprisoned or sent into exile. After its release in 1991, religious organizations have regained freedom and regained property that had been confiscated.