Where is Latvia located on the map? Latvia is an independent nation located in Northern Europe. Check out the following images to see location of Latvia on maps. 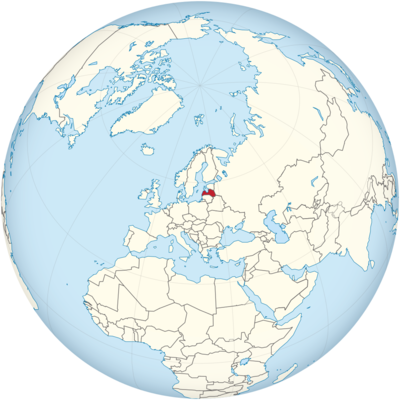 Latvia is one of the three Baltic States, along with Lithuania and Estonia. They are located in the northeast of Europe. Latvia borders Estonia in the north, Russia in the east, Belarus in the southeast and Lithuania in the south. In the east lies the Baltic Sea. The Riga Bay (or Riga Bay of the Sea) protrudes far into Latvia. By the way, Latvia is called Latvija in Latvian.

Latvia is in the Baltic States.

In Latvia flat plains alternate with hilly land. There are many lakes and forests. The longest river is the Gauja, which is also called Livonian Au in German. It is 452 kilometers long. The Daugava, which is called in Latvian Daugava, is on Latvian territory’s second longest river. It flows from Russia and Belarus to Latvia, where it flows into the Baltic Sea. The highest mountain is more like a hill. It is called Gaising (in Latvian Gaiziņkalns) and measures 311 meters.

Here you can see Latvia’s cities and neighboring countries.

The climate of Latvia is cool temperate. The winters are cold with lots of snow, the summers are moderately warm. In the west, the influence of the Baltic Sea is noticeable, here the climate is more maritime (influenced by the sea) with cooler summers and warmer winters. In the east, the temperature differences are greater on a day and within a year.