Where is Kenya located on the map? Kenya is an independent nation located in Eastern Africa. Check out the following images to see location of Kenya on maps. 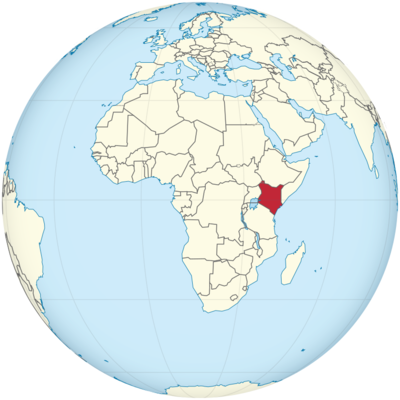 Kenya is in the east of Africa. In the northwest, South Sudan borders Kenya, in the north Ethiopia, in the northeast Somalia, in the south Tanzania and in the west Uganda. Kenya is by the sea, on the Indian Ocean. It is 580,367 square kilometers and therefore about twice the size of Germany. The equator, which divides the world into a northern and a southern hemisphere, runs right through Kenya.

Kenya is in the east of Africa.

Kenya is characterized by three major landscapes. These are the region on the coast with the long beaches, the flat and dry east and the central highlands with the East African Rift. The largest part of Kenya takes a steppe landscape one, the climate is so very dry. But there are also many mountains, rivers and two large lakes, Lake Victoria and Lake Turkana.

To the east and west of the East African Rift lies the central highlands of Kenya, which extend from an altitude of 1500 meters to the highest peak in the country.

The highest point is called Batian and is 5199 meters high. This mountain is located in the Mount Kenya massif . The mountain is often referred to as “Mount Kenya”, just like the massif. This is also the second highest mountain range in all of Africa. The Maasai call it the “black and white mountain”. It is located 140 kilometers northeast of the capital Nairobi. The Mount Kenya National Park, a popular nature reserve in Kenya, is also located there.

The Kenyan coast is famous for its beauty. The approximately 500 kilometers long coastline attracts many tourists. Especially the offshore coral reefs turn out to be a paradise for divers and fishermen. Many species of fish live here. The humidity is very high and there are always pleasant temperatures between 20 and 30 degrees. The coastal region is also very fertile and sisal, coconuts, cassava and cotton grow.

The east of Kenya is flat and dry. In the south lies the Nyiri or Nyika desert.In the native Swahili language this means nothing more than “desolate land”. It’s also hot on the border with Somalia. Only a few mountains can be found here.

There are only a few rivers here, but the longest river in Kenya, the Tana, flows here. How long it is exactly is not known, the figures vary between 700 and 1000 kilometers. The Tana rises in the east of the Mount Kenya massif, which is covered by snow all year round. Therefore the beginning of the river cannot be clearly identified. The Tana finally flows into the Indian Ocean .

At 68,000 square kilometers, Lake Victoria is almost as large as the German state of Bavaria. This makes it the largest lake in Africa and the third largest lake in the world. However, only a small part of this lake is in Kenya. Most of the lake can be found in Uganda and the second largest in Tanzania.

The lake is not particularly deep and is threatened by dangers due to the high growth of algae in the lake. The farmers cleared the land around the lake to make space for agriculture. The result: nitrogen, phosphorus and sulfur end up in the lake and poison it. These substances act like fertilizers for the algae and have fatal consequences. When the algae die, they sink to the bottom of the lake, rot and consume the oxygen that the other plants, but also the fish, urgently need. But since a lot is growing around the lake, many people settle there. That is why intensive agriculture is practiced and fertilization is carried out with the consequences already mentioned.

However, the largest lake in Kenya is Lake Turkana with an area of ​​6405 square kilometers. It is located in the northwest of the country and stretches long. Few people live here.

In the 19th century the lake was first named Rudolfsee after Rudolf, the Crown Prince of Austria and Hungary (1858-1889). In 1975 it was renamed Lake Turkana. The Turkana are the largest ethnic group that lives here by the lake. Many Stone Age finds have been made at Lake Turkana. The Homo rudolfensis was even named after the Lake Rudolf.

The rift valley is 300 kilometers wide here. A bird paradise has arisen on site, because huge flocks of flamingo live here, which have settled on the lake shore. This lake has only one constant inflow and no outflow. He’s getting too salty.