Where is Kazakhstan located on the map? Kazakhstan is an independent nation located in Central Asia. Check out the following images to see location of Kazakhstan on maps. 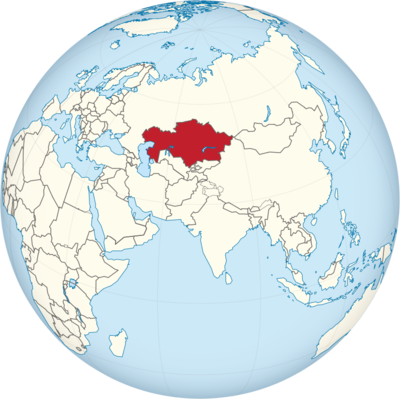 Kazakhstan is the ninth largest country in the world in terms of area. The country is seven times the size of Germany. 17 million people live in Kazakhstan. It is one of the successor states of the former Soviet Union. Kazakhstan was part of the Soviet Union until 1991 and only became an independent state after its dissolution.

Kazakhstan stretches over 2,800 kilometers from east to west, which is as far as driving three times from south to north in Germany. From north to south it is 1,600 kilometers in Kazakhstan. In Kazakhstan, there would be space for Spain and Portugal, France, the Benelux countries, Italy, Austria, Switzerland, Germany, Sweden, Great Britain and Denmark at the same time.

You can easily see the countries bordering Kazakhstan on the map. If you click on the map above this text, you will see the boundaries even more precisely. The country also borders the Caspian Sea at 600 kilometers. If you add up all the limits, you get over 12,000 kilometers. That’s a lot.

Here you can see where Kazakhstan is.

In the west and north of Kazakhstan there are vast plains. In the southeast and north it is mountainous and even very mountainous. There is a difference in altitude of 7000 meters. The highest mountain in the country is called Khan Tengri and is just over 7000 meters high.

At 600 kilometers, Kazakhstan borders the Caspian Sea , which is not a sea at all, but a lake. It is the largest inland body of water in the world and covers an area of ​​371,000 square kilometers. It is even bigger than Germany!

Large rivers like the Urals and the Volga drain their water into this lake. At its deepest point, the lake is almost 1,000 meters deep, in the north only six meters. The water level of this lake fluctuates extremely. The lake probably loses water through strong evaporation.

But other causes are also suspected, the scientists are not sure. The water level has risen recently. Perhaps this is due to an oil film that arose from the frequent test drilling in the lake. But it could also be that the lake bed has risen due to earth movements. In any case, this lake is threatened, although it represents an important basis of life for humans and animals and should definitely be protected.

Another large inland lake – the Aral Sea – is also located in Kazakhstan. It is the fourth largest inland body of water on earth. In 1960 this lake was still the size of Bavaria. Aral means “island”. The lake used to be called the “Aral Sea”. Unfortunately, there isn’t much left of this sea today.

A great deal of water was drawn from the lake by means of canals in order to irrigate the cotton plantations. Too much water seeped into the sand and now there are only two small remnants of what was once the great Aral Sea. The desert has spread around it.

The region is hit hard by the loss of this large reservoir. In total there are 4,000 larger or smaller lakes in Kazakhstan. Most of them are salt lakes.

The longest river in Kazakhstan, the Irtysh, which rises in the Altai Mountains, is also threatened by water scarcity. In total, the Irtysh is 4473 kilometers long and runs through Kazakhstan for 1700 kilometers. This river flows over the Chinese border and in China a lot of water is tapped from the river, which the Chinese use for their own projects. So the Irtysh has less and less water. Because of this, water scarcity could become a major problem for Kazakhstan in the future.

Kazakhstan is the furthest away from the great oceans. When a country is far from the sea, it has a continental climate. The summers are hot and dry here. They usually pass into winter without a long autumn. This can be very cold and there is usually little rainfall.

The temperatures in some regions are -40 degrees or regularly -30 degrees. These very low temperatures predominate in the northeast and in the steppe and desert areas in the interior of Kazakhstan. But it gets really hot here in summer, then also up to 40 degrees PLUS.

The climate in the south of the country is milder and not as extreme. Wine, apricots or rice can even grow here. The humidity is lower and therefore the temperatures can be tolerated better than in Southeast Asia. The humidity there is much higher. A cooling wind often blows in the steppes of Kazakhstan. Sometimes, however, there is also a storm called Buran that blows from the northeast and is not pleasant for humans and animals.

The climate in the mountains of Kazakhstan is a little different than in the rest of the country. Warm days and very cold nights can occur here in the summer months. The weather does not stay stable and changes quickly. So suddenly rain falls and in higher regions then also snow.