Where is Jamaica located on the map? Jamaica is an independent nation located in North America. Check out the following images to see location of Jamaica on maps. 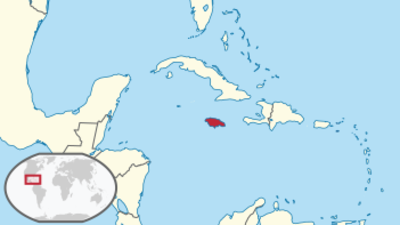 Jamaica is in the Caribbean. The island is also a state, i.e. an island state. The island counts with Cuba, Hispaniola (on which Haiti and the Dominican Republic are located) and Puerto Rico (which belongs to the USA) to the archipelago of the Greater Antilles. Cuba is the northern neighbor, Haiti the eastern.

The name Jamaica is derived from the word Xaymaca. It comes from the language of the Arawak who lived here before the Europeans came to the island. It means “land of wood and water” or “land of springs”.

Jamaica is in the Caribbean as you can see on the map.

Jamaica is pretty mountainous. The mountains in the center drop off quite steeply to the north, but flatter to the south. To the east are the Blue Mountains with the highest mountain in the country, the Blue Mountain Peak. It measures 2256 meters. On the coast there are also flatter plains in the west and south. You can see them in green on the map.

Many small rivers have their source in the mountains. The longest is the Rio Minho, which rises in the center and flows south into the Caribbean Sea. When it rains little, some sections remain completely dry. The second longest river is the Black River at 53 kilometers.

The weather is likely to be pretty warm! The average annual temperature is 27 degrees. It is warm all year round and there are no different seasons. The temperature difference is greater on a day than from month to month. February is the “coldest” month with 25.6 degrees and July is the hottest with 28.5 degrees. These are the temperatures of Kingston, in the mountains they are a few degrees below.

Rain falls mainly in May and June and between August and October. It rains much more in the mountains of the Blue Mountains than on the south coast, which lies in the rain shadow of the central mountains. There is a risk of hurricanes between July and November.