Where is Ireland located on the map? Ireland is an independent nation located in Northern Europe. Check out the following images to see location of Ireland on maps. 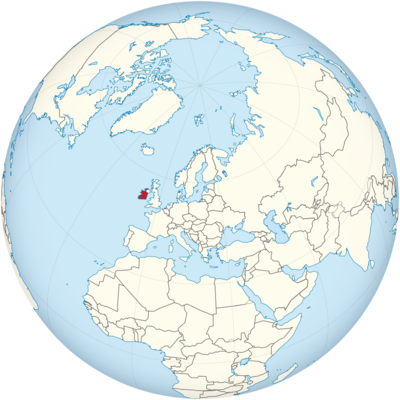 Ireland is in Western Europe.

Ireland is also known as the “Green Island”. Why? Because there are a lot of meadows, forests and moors and they conjure up a lot of green in the country! By the way, Ireland is called Éire in Irish, which is derived from a Celtic goddess in Irish mythology.

In the middle of the island there is a wide plain in which there are many moors. This plain is surrounded by hills and low mountains. The highest mountain in Ireland is in the southwest in the mountains of the Macgillycuddy’s Reeks. It is called Carrantuohill and measures 1041 meters.

The west coast, exposed to the Atlantic, is very rugged. There are high cliffs here like the Cliffs of Moher. There are also inlets here that extend far into the country. The east coast is much more uniform.

Many rivers flow through Ireland. The longest is the Shannon, which has its source in the northeast and then flows southwest until it finally flows into the Atlantic. The Shannon also forms three lakes in its course: Lough Allen, Lough Ree and Lough Derg. Lough is the Irish name for lake, it is spoken like our word hole. The largest lake in the Republic of Ireland is Lough Corrib in the west.

Ireland also has a number of small islands. The largest of them is called Acaill and is located in the northwest.

Ireland is in the temperate climate zone. The Gulf Stream, which carries warm water to the coast of Ireland, makes it even warmer than other regions at the same latitude. The winters are mild, the summers moderately warm.

It rains a lot in Ireland – with the west being much wetter than the east. For example, around twice as much rain falls on Valentia Island on the west coast than in Dublin. There is also a lot of wind blowing in the west and north.