Where is Iran located on the map? Iran is an independent nation located in Western Asia. Check out the following images to see location of Iran on maps. 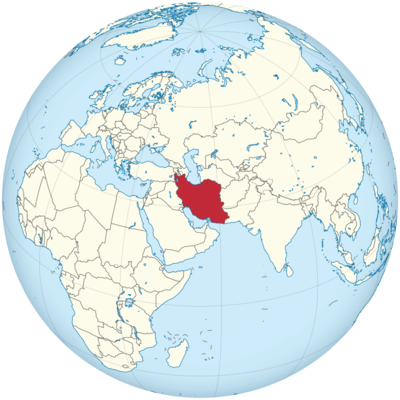 Iran includes parts of the territory of former Persia, even if the current state of Iran is not identical to historical Persia. The country is in the Middle East. Over 82 million people live there on a total area of ​​1,648,195 square kilometers.

Iran is one of the largest countries in the world and also very populous. There was a revolution there at the end of the 70s of the last century. Since then, Iran has referred to itself as the “Islamic Republic”.

Which countries does Iran border on?

Iran lies on a plateau between the Caspian Sea, which can be found in the north, and the Persian Gulf and the Gulf of Oman in the south. You can see that on the map. Just click on it!

The seven neighboring states of Iran are Azerbaijan, Armenia and Turkmenistan in the north, Pakistan and Afghanistan in the east and Turkey and Iraq in the west.

On this map you can see where exactly Iran is.

Is there a desert in Iran?

Only about 7 percent of Iran is covered with forest. Real “primeval forests” can still be discovered in the north of the country. A large part of the land is used as grazing land for animals and around 9 percent of the area is planted.

Most of the country is desert. The largest desert in Iran is called Dasht e Lut. After all, it covers an area of ​​166,000 square kilometers. It can get really hot here, temperatures of 50 degrees are not uncommon. There is a second great desert. It is called Kavir and is a little further north. Almost no people live in these desert landscapes.

The highest mountain in Iran is called Damāwand and is an extinct volcano located in the Elburs Mountains and reaching a height of 5671 meters. There are some other high mountains, such as the Sabalán with a height of 4811 meters and another 4000 meters.

The longest river in Iran is called the Karun and flows for 720 kilometers until it flows into the Persian Gulf. There are other rivers, but like the Sefid Rud or the Diyala, these are not rivers on which ships could sail.

Iran has two coasts, one on the Caspian Sea and one on the Persian Gulf.

The largest lake in Iran is called Urmia Lake (Orúmíyeh). Its size changes depending on the water level and is between 4500 and 6000 square kilometers. Over the years, however, this lake has become smaller and smaller and now has much less water than in the 80s of the last century. In principle, water shortage is also a major problem for Iran because water has been wasted for many years.

The climate in Iran is very different from region to region. The country can be divided into four climate zones: The highlands in the center of the country, where it is very hot and dry in summer and cold in winter; the northern and western outskirts, where there is snow several months a year; the southern Caspian coastal lowlands, where it is rather humid and mild, and the lowlands of the Persian Gulf – here the summers are humid, dry and hot, but the winters are not very cold and rather mild. In summer it can get over 45 degrees in some regions.