Where is Iceland located on the map? Iceland is an independent nation located in Northern Europe. Check out the following images to see location of Iceland on maps. 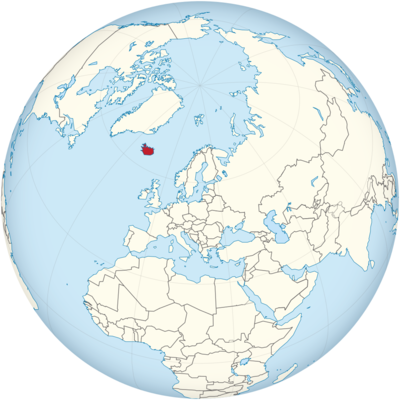 Location of Iceland in Europe

About eleven percent of the area of ​​Iceland are glaciers. The largest of them is Vatnajökull. It extends over 8,100 square kilometers – that’s more than 252,000 soccer fields!

Volcanoes are another feature of Iceland’s landscape. Two tectonic plates run under Iceland. They are separated by a mountain range, the “Mid-Atlantic Ridge”, which is largely below sea level. Iceland thus forms one of the highest peaks of this mountain range. Most volcanoes are located where the two tectonic plates meet. There are 31 active volcanoes in Iceland. Some volcanoes lie under glaciers. Due to the volcanic activity, there are also geysers here. These are hot springs that regularly emit fountains of water.

There is a lot of water in Iceland, namely in the form of rivers, lakes and waterfalls. The waterfall with the most water is the Urriðafoss. It is 40 meters wide, but the height of fall is only 6 meters. The highest waterfall is the Morsárfoss, which falls 227 meters deep.

The interior of the country is formed by the Icelandic highlands. It’s very dry and windy here. In addition to volcanoes and glaciers, there are also stone deserts, lava fields and rivers running in deep gorges.

The longest river in the country is the Thjorsa. In Icelandic it is written like this: Þjórsá. It flows 230 kilometers through Iceland, from northeast to southwest. It flows into the sea at the Urriðafoss waterfall. The highest mountain is the Hvannadalshnúkur at 2110 meters. It is located in the southeast of the island.

Iceland’s location in northern latitudes ensures cool temperatures overall, although winters are rather mild. The warm Gulf Stream affects the climate in Iceland. However, the summers are also rather cool. Rain falls fairly evenly throughout the year, with the inland plateau receiving less rain.

It rarely gets warmer than 20 degrees in Iceland. July is the warmest month, in Reykjavik the average maximum temperature is 13.3 degrees. The coldest month is January with 1.9 degrees during the day and minus 3 degrees at night.