Where is Honduras located on the map? Honduras is an independent nation located in North America. Check out the following images to see location of Honduras on maps. 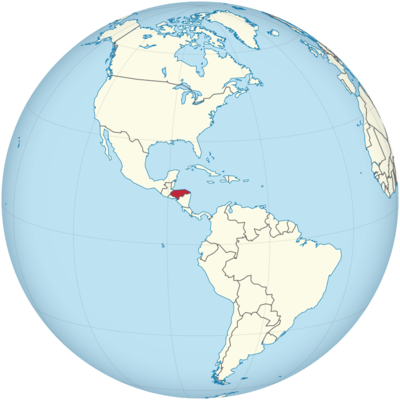 Honduras is located in Central America, at the widest point of the land bridge between North and South America. In the northwest, Honduras borders on Guatemala, in the southwest on El Salvador. However, it has the longest land border in the south and southeast with Nicaragua.

Honduras also has two coasts. In the southwest lies the Gulf of Fonsecas, which belongs to the Pacific. This stretch of coast is 124 kilometers long. The Honduran coast on the Caribbean Sea, a tributary of the Atlantic, is much longer. It extends from the Río Motagua, which forms the border with Guatemala, to the Río Coco, which is the border river to Nicaragua.

Honduras is in Central America. There is only a small bay with access to the Pacific, while the Caribbean coast is quite long.

Scroll on to Maps and Photos of Honduras or to page 3 for information about the capital and the climate!

There is flat land on the coasts. The Caribbean coast is criss-crossed by rivers, swamps and lagoons. In the northeast lies the Miskito Coast, which extends across the border to Nicaragua. It is named after the indigenous Miskito people. In Spanish, however, it is called Costa de los Mosquitos, which means mosquito coast, where mosquito means mosquito. This is how the Spanish translated the word miskito when they arrived in the 16th century. In fact, these mosquitoes also live here in large numbers.

The entire northeast of Honduras is also called La Mosquitia after the coast. Tropical rainforests, pine savannas and mangroves grow hereforests. The area is still very original. The Caratasca lagoon is also here. The Río Plátano Biosphere Reserve is also within La Mosquitia. Countless plants grow here and many endangered animal species live here. Around 2000 Miskito and Paya Indians were able to preserve their traditional way of life here.

The Islas de la Bahía (“Bay Islands”) are located off the Caribbean coast. They belong to the barrier reef of Belize (see there ) and consist of three main islands (Roatán, Guanaja and Útila) and several small coral islands. The Islas del Cisne (Swan Islands) lie even further in the sea. All of these islands were discovered by Christopher Columbus (see history ). Closer to the coast, however, are the two small islands and 14 coral islands that together make up the Cayos Cochinos.

Pacific islands in the Gulf of Fonseca

There are numerous small volcanic islands in the Gulf of Fonseca. El Salvador, Honduras and Nicaragua fought for a long time about their nationality. In 1992 the International Court of Justice established affiliation. The island of Zacate Grande and the island of Del Tigre (“Island of the Tiger”) belong to Honduras.

The climate in Honduras is tropical because Honduras is in the tropics. It is warm all year round, the temperatures hardly fluctuate. There are no seasons, but a dry and a rainy season. The rainy season is from May to October, with the least amount of rain falling in July and August. The rainy season, especially between July and October, is the season of hurricanes. This is when a particularly large number of hurricanes occur. The dry season is from November to April. The temperatures are then a little lower.

In the inland mountains, it gets cooler the higher you go. In Tegucigalpa, the average annual temperature is 21.9 degrees. On the CaribbeanAt 26 degrees it is much warmer on the coast. There it rains a lot more and all year round. Overall, precipitation decreases from north to south.