Where is Guyana located on the map? Guyana is an independent nation located in South America. Check out the following images to see location of Guyana on maps. 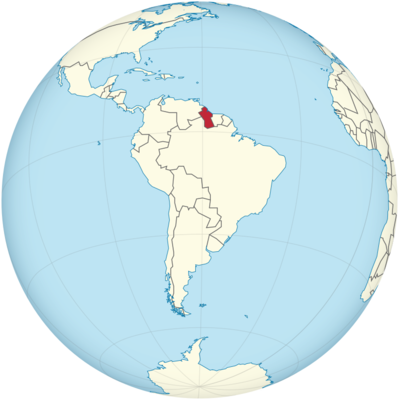 Guyana is a country in South America. It lies between Venezuela in the west and Suriname in the east. The southwest and the south border Brazil. In the north, Guyana is on the Atlantic coast. In South America, Guyana is the third smallest country after Suriname and Uruguay.

Although Guyana is geographically part of South America, the country’s culture is more similar to that of the West Indies such as Trinidad and Tobago or Barbados. Guyana is therefore usually counted among the Caribbean countries.

Between 1814 and 1966, Guyana was a British colony under the name of British Guiana. It had also previously belonged to the Netherlands. Guyana is the only English-speaking country in South America, English is the official language here. Most of the residents speak a Creole language based on English.

Here you can see where Guyana is.

British Guiana was named Guyana after its independence. Guiana was already baptized by the Indians: it means “land of many waters”. However, the Guiana region also included Suriname, French Guiana and parts of Venezuela and Brazil, as you can see on the map above. To distinguish the country (Guyana) and the region (Guyana) are added for the region in the German one a one.

A slightly hilly, sandy region joins this flat land. This sand belt is 150 to 250 kilometers wide. Hardwood forests grow here and most of the country’s mineral resources such as bauxite, gold and diamonds are stored here.

All of the rest of the country is occupied by the highlands. Rainforest grows here, which takes up 85 percent of the country’s area. The tepuis are typical of the western area, the mountainous country of Guyana. These are table mountains that rise high above the rainforest with their steep walls.

Guyana’s highest mountain is such a table mountain, the Roraima-Tepui with a height of 2810 meters. It is in the Pacaraima Mountains. There the impressive Kaieteur waterfall falls 226 meters down in a single step – and over a width of almost 100 meters.

The Rupununi savannah in the southwest of the country, on the border with Venezuela and Brazil, also belongs to the highlands. The Kanuku Mountains divide the savannah into a northern and a southern area.

Several rivers originate in the highlands and flow from there to the Atlantic. The longest among them is the Essequibo. It is 1010 kilometers long and flows into the sea in a delta. There are hundreds of islands in the estuary. The largest of these are Hogg Island with 250 residents, Wakenaam with 10,000 residents and Iguana Island with 4200 residents. Other major rivers are the Corantijn (724 kilometers) on the border with Suriname and the Berbice (595 kilometers).

The entire western area from Guyana to the Essequibo River, called Guiana Esequiba, is still claimed by Venezuela today. In 1899 it was awarded to Great Britain in an arbitration award, and in 1963 Guyana became independent. Venezuela does not recognize this to this day. On the other hand, Suriname claims an area west of the Corantijn River.

Guyana is in the tropics. The equator runs just south of the country. It’s hot and humid. On the coast, the northeast trade wind brings a little cooling. The average mean annual temperature is 27 degrees. The average maximum temperature in Georgetown is 32 degrees. The warmest month is September with 27.7 degrees, the coldest month is January with an average of 26.1 degrees. Temperatures hardly fluctuate all year round. So there are no seasons.

Instead, a distinction is made between rainy and dry seasons, although these are not too pronounced in Guyana, as it rains all year round. This is also called the tropical rainforest climate. You can still make out two periods in which more rain falls than usual. One rainy season lasts from May to July (in the south from April to September), and the second from December to January. The rain falls mostly in the afternoon in heavy showers. It is a little drier between September and November and from February to April. Overall, it rains more in the north than in the south.