Where is Georgia located on the map? Georgia is an independent nation located in Western Asia. Check out the following images to see location of Georgia on maps. 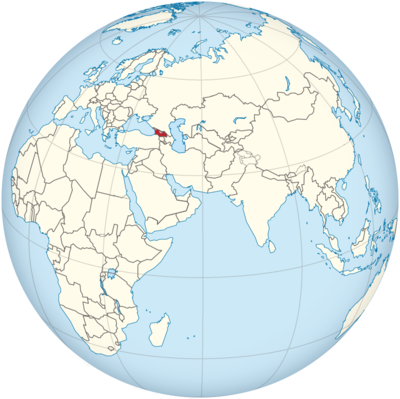 Georgia is in the Middle East. This is what the south-west of Asia is called from a European perspective. Further regions can be distinguished within the Middle East. Here Georgia belongs to the Caucasus. That is the region that lies in the area of ​​the Caucasus Mountains. And finally, Georgia, along with Armenia and Azerbaijan, is part of the South Caucasus. Geographically, these three countries belong to Asia, but culturally and historically they are more likely to belong to Europe.

Georgia’s west lies on the Black Sea. In the north lies the Greater Kaukusus, the largest mountain range in the Caucasus. The border with Russia runs through the mountains. In the south, Georgia borders Turkey, Armenia and Azerbaijan. So there are four neighboring countries.

Two provinces of the country have declared themselves independent: Abkhazia in the north-west and South Ossetia in the central north. Georgia does not recognize this, but has no control over the areas, which are therefore actually independent. However, this is only recognized internationally by a few other countries, including Russia.

Here you can see where Georgia is. On the map you can also see where the breakaway provinces of Abkhazia and South Ossetia are located. Ajaria in the southwest is still part of Georgia as an autonomous republic.

Georgia is a mountainous country. In the north lie the foothills of the Greater Caucasus, in the south part of the Lesser Caucasus. Both are connected by the Lichi Mountains in the center of the country. On both sides of the Lichi Mountains lie lowlands: in the west the Colchian Plain to the Black Sea, in the east the Transcaucasian Depression to the Caspian Sea.

Several rivers run through the country. The Kura is the longest of these rivers, it comes from Turkey and flows on to Azerbaijan. Other rivers are the Alazani, the Rioni and the Enguri. The country’s largest lake, the Paravani, is located in the Lesser Caucasus.

The Lichi Mountains also divide the country climatically into a western and an eastern part. The coast on the Black Sea is subtropical and humid, the Colchis plain has a Mediterranean climate. The Caucasus in the north protects against the cold from the north. The average annual temperature here is 15 degrees. With 3000 millimeters of rain per year, it is quite humid in the west, especially on the Black Sea coast, while far less rain falls to the east.

In the middle of the country and in the east there is a temperate and dry continental climate. The average annual temperature is 11 to 13 degrees. Here only around 400 millimeters of precipitation fall per year. The higher the mountains, the cooler it gets. Here the climate becomes alpine. Generally speaking, summers are hot and winters are cold.