Where is Gambia located on the map? Gambia is an independent nation located in Western Africa. Check out the following images to see location of Gambia on maps. 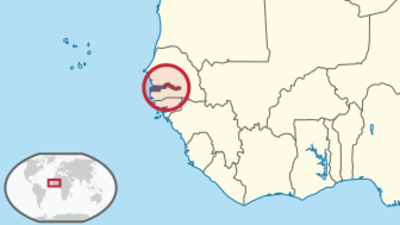 The special thing about Gambia is that it is almost completely enclosed by Senegal. The country is elongated and narrow a little below the center of Senegal and separates the Casamance of Senegal from the rest of the country. Casamance is the name given to the region in southwest Senegal. This separation causes inconvenience. If you want to go from Casamance to the north of Senegal, you either have to take a huge detour or cross two national borders…

The Gambia has several islands in the Gambia River. These include the Baboons Islands, which are made up of five islands. Chimpanzees have been released here. However, the name comes from the baboons, a species of baboon that is only found here. Entering the islands is prohibited.

James Island, now called Kunta Kinteh Island, is a small island in the middle of the river. There is the St. James Fort, which is a UNESCO World Heritage Site. Further inland is Janjanbureh Island.

St. Mary’s Island protrudes into the mouth of the Gambia River. It is a sandbank island close to the mainland and accessible via a bridge. On the island is the capital Banjul. The word Banjul means “bamboo island” in the Mande language. In the past, bamboo forests grew here. The island is surrounded by the mangrove forest.

The Bijol Islands are in the Atlantic. They consist of five islands about three kilometers from the mainland. Swallows and seagulls breed here.

The land is very flat. The highest point is in the east and is an unnamed hill of 53 meters. So you can’t really talk about mountains…

In the west, Gambia has access to the Atlantic. The coast is about 80 kilometers long. The river Gambia, after which the country is named, flows into the Atlantic after having previously flowed through the whole country with many turns and over a length of 477 kilometers. The mouth in the Atlantic is 22 kilometers wide and forms a wide funnel.

Several other rivers from Senegal flow into the Gambia River. Most of them have the addition “Bolong”, like the Bintang Bolong, which means tributary in the Mandinka language. The Gambia is getting wider towards the Atlantic. The river and its tributaries flow through a valley. In the rainy season there are always floods here.

Gambia is in the tropics. There is a rainy season from June to October. It is then not only damp, but also very warm. Inland temperatures can even rise to 43 degrees. In total, between 800 and 1000 milliliters of rain fall each year.

The dry season then lasts from November to May. The harmattan, a wind from the Sahara that carries a lot of dust and sand with it, then blows from the northeast. It’s cooler than the rainy season. In January it is an average of 27 degrees.

Overall, it is cooler on the coast than inland. In January it is on average 23 degrees, in June 27 degrees.