Where is Fiji located on the map? Fiji is an independent nation located in Melanesia. Check out the following images to see location of Fiji on maps. 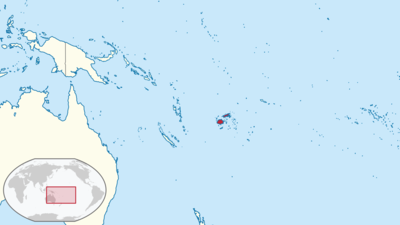 The Fijis consist of an archipelago with 332 islands, most of which are of volcanic origin. A land area of ​​18,274 square kilometers is distributed over these islands. Thus Fiji is roughly as big as the German state Rhineland-Palatinate.

Viti Levu is the largest with 10,429 square kilometers and Vanua Levu is the second largest island in the archipelago with 5556 square kilometers. The third largest island is called Taveuni, followed by Kadavu. There are also some smaller archipelagos. Translated, Vanua Levu means “big country”. The two large islands take up almost the entire area of ​​the country, namely nine tenths. The coastline is about 1130 kilometers.

On the map you can see the two largest islands, the main islands, and many other small islands that also belong to Fiji.

If you are looking for the islands on the map, you have to look over 2,700 kilometers north from New Zealand, there are the Fiji Islands. Characteristic are the mountains, which often stretch to the coast. This is followed by a narrow, flat plain on the coast and coral reefs in front of the islands. About a third, namely 110 islands, are inhabited.

The southeastern sides of the islands are mostly covered by dense rainforest, while the west is drier and suitable for growing sugar cane. From a geological point of view, the islands lie in the area of ​​influence of the volcanically active oceanic Pacific plate.

The climate in the Fiji Islands is tropical. The southeast trade wind influences the climate of the Fiji Islands, so that most of the year there is an easterly wind that brings a cool breeze. Between November and March, the islands are threatened by more or less violent cyclones. The temperatures reach up to 30 degrees.

The north-western sides of the two large islands facing away from the wind have to reckon with less precipitation, and the sun shines more often here. More rain falls on the weather sides in the southeast. These differences affect the two larger islands. These differences are not so great for the small islands. The dry season is from May to October.