Where is Ethiopia located on the map? Ethiopia is an independent nation located in Eastern Africa. Check out the following images to see location of Ethiopia on maps. 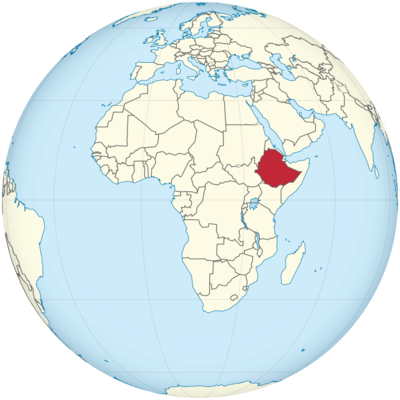 Ethiopia borders Eritrea to the north, Sudan and South Sudan to the west, Kenya to the south, Somalia to the south and east, and Djibouti to the east. There is no access to the sea, which is why Ethiopia is a landlocked country. Ethiopia is the tenth largest state on the entire African continent. Around 100 million people live here. Ethiopia is roughly three times the size of Germany.

The name of the country is derived from ancient Greek: aethiops means “person with a burned face” which means people with dark skin color.

The Abyssinian Empire existed on the territory of Ethiopia (and Eritrea) until 1974. Unlike many African countries, no colonial power could occupy the country. Ethiopia is also the oldest independent state in Africa.

Ethiopia is located on the “Horn of Africa”, which actually looks a bit like a rhino. This is the name given to the part of the country in East Africa that protrudes like a wedge into the Indian Ocean. You can see that quite well on the map on the right.

The countries that make up the “Horn of Africa” ​​are shown in green.

But if you move away from the city center, away from the big shops and hotels, you will also find a lot of poverty here in Addis Ababa. The city has grown far too quickly over the years without the infrastructure such as water supply, electricity, traffic or sewage being able to be adapted to the number of residents.

However, one is in the process of expanding the city further and providing it with the most important utilities. But the biggest problem remains the poor supply of drinking water, so that many people get sick from contaminated water. The very high child mortality rate in Ethiopia is also related to this.

Ethiopia is the second highest country on the continent, only the small state of Lesotho in the south of Africa is even higher. Half of the country is at an altitude of over 1200 meters, a quarter over 1800 meters and a small part is even over 3500 meters.

In this highland is Addis Ababa, the capital of the country, which is also quite high at 2,370 meters. The highest mountain in the country is also located here, the Ras Daschän at 4550 meters. It is not the only mountain in Ethiopia that is more than 4000 meters high. In the highlands is also the largest inland lake in Ethiopia, Lake Tana.

The highland slopes to the west. In the south-east there is a plain called Ogaden. And in the northeast, on the border with Eritrea, the Denkali lowlands spreads out, the deepest point of which is 116 meters below sea level.

The East African Rift runs from northeast to southwest in the middle of the country. This rift valley is also called the Abyssinian Rift here. It divides the highlands into a north-western and a south-eastern part. There are many lakes in this region that have no drainage and that were formed from volcanoes. They are crater lakes.

Many rivers cross the highlands of Ethiopia. The longest are the Blue Nile and the Shabelle.

The Blue Nile rises from Lake Tana, only to then make a wide arc and flow through the Ethiopian highlands. It crosses the border with Sudan and at the end unites with the White Nile, one of the longest rivers on earth: the Nile. The two rivers meet in the city of Karthum, as you can see on the adjacent map.

The Shabelle has its source in the highlands and then flows southeast to Somali. It finally flows into the Juba and then into the Indian Ocean.

Ethiopia is a large country with many different landscapes. There are many climate zones here, which are also determined by the different altitudes of the country.

There are no seasons like ours in Ethiopia. A distinction is made between rainy and dry seasons. It is most humid in western and south-western Ethiopia. It rains abundantly twice a year. It is definitely dry between December and March, otherwise it rains frequently.

It rains very rarely in Eastern Ethiopia. Here dry savannahs predominate and the annual rainfall is just 250 millimeters. Sometimes it even rains less than 100 millimeters all year round. But the sun can shine 350 days a year.