Where is Eritrea located on the map? Eritrea is an independent nation located in Eastern Africa. Check out the following images to see location of Eritrea on maps. 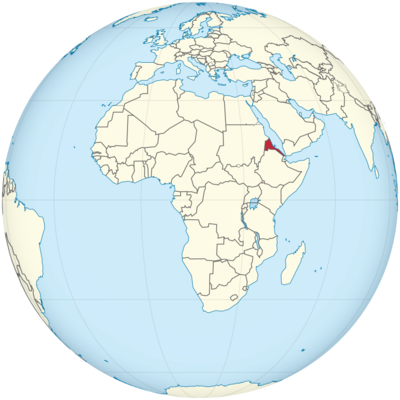 The name Eritrea comes from the Greek and means “Red Sea”. In fact, Eritrea is located on the Red Sea, a long but narrow sea between Africa and the Arabian Peninsula.

Eritrea is a very small country, about a third the size of Germany. It borders Sudan to the west and Ethiopia to the south. In the far south east there is a short border with Djibouti. Eritrea also has around 200 islands in the Red Sea. The Dahlak Islands belong to them.

Eritrea is on the Red Sea.

Inland lies the highlands of Abyssinia, which stretches from Ethiopia to Eritrea. The highest mountain is called Soira and is 3,018 meters high. These highlands are densely populated and cooler. There are fertile areas in the southern highlands. The salt desert of the Danakil Depression in the south is extremely hostile to life. It can get up to 50 degrees here and only a few living things survive in this region. In the far west, a piece of the Sahara belongs to Eritrea.

The coast on the Red Sea is very long at 1100 kilometers. It’s hot and dry on the coast. To the mainland coast there are the coasts of the islands with around 1000 kilometers.

Eritrea is in the tropics. In the central highlands, the temperatures are more moderate and are around 22 degrees during the summer. At night it cools down due to the altitude. There are fewer temperature differences on the Eritrean coast. The average value during the day is around 30 degrees. It’s hot and dry here. In the desert-like Danakil Depression it gets up to 50 degrees and there is no rain at all.