Where is Djibouti located on the map? Djibouti is an independent nation located in Eastern Africa. Check out the following images to see location of Djibouti on maps. 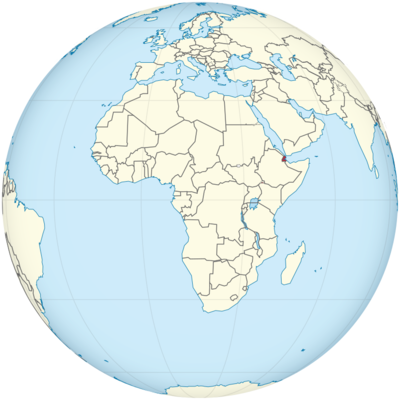 You probably haven’t heard of a country called Djibouti. The question “Where is Djibouti actually located?” Is entirely justified. It’s a pretty small country and is located in the Horn of Africa. This is the name given to the tip of the land that actually looks like a horn and that protrudes into the Indian Ocean in the east of Africa. In addition to Djibouti, the countries Ethiopia, Somalia and Eritrea are located on the Horn of Africa.

These are also the three neighboring countries of Djibouti. Eritrea is in the north, Ethiopia in the west and south, and Somalia in the south-east. Djibouti is roughly the size of the state of Hesse in Germany. Djibouti borders the sea to the east, namely the Gulf of Aden. This opens to the Indian Ocean, while in the north it goes to the Red Sea. Opposite Djibouti is the Arab Yemen. The Gulf of Tadjoura protrudes far into Djibouti . The land encloses the gulf a bit like a horseshoe.

The highest mountain in Djibouti with 2063 meters is called Mousa Alli and is located on the Ethiopian border. The rivers in Djibouti are called Essalou, Ouâhayyi and Sadaï. However, they do not carry water all year round, but keep drying out.

Here you can see where Djibouti is in Africa.

Djibouti has a diverse landscape, although it is so small. There are deserts, lakes, mountains, valleys, volcanoes and rivers. In the north are the mountains and the desert and semi-desert plains.

The whole country lies in a depression, the Afar depression. This is a plain. One also speaks of the Afar triangle because it has a triangular shape.

Typical of the country are its many salt lakes, and parts of the country are even below sea level. The Assalsee is surrounded by volcanoes and here you can see straight away that it is a salt lake: there is salt everywhere on the shore. It is said to be the most salty lake in the world, with ten times more salinity than the ocean. Incidentally, in the middle of Lake Assal lies one of the deepest places in the world. It is 157 meters deep. The Abbe Lake is the meeting place for many flamingos and pelicans who like to retreat here.

There are many coral reefs off the coast of Djibouti that are ideal for diving.

Djibouti is one of the hottest countries on earth. At the same time, the humidity is quite high. It gets particularly hot between June and August. The thermometer climbs to over 40 or even 50 degrees. Even 55 degrees were measured. It gets hottest in the Tadjoura Basin. In addition, there is a hot desert wind that sweeps over the steppes.

In the period from November to March it can rain once in a while. During this time the temperatures are also slightly lower. Rain falls in the amount of 131 millimeters. Rain only falls on almost 20 days a year, and then not everywhere. So the country is very dry.