Where is Cuba located on the map? Cuba is an independent nation located in North America. Check out the following images to see location of Cuba on maps. 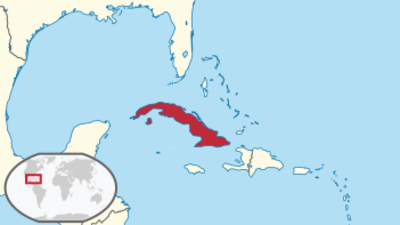 Cuba is a state that lies in the Caribbean. It consists of the main island, which is also called Cuba, as well as the smaller island Isla de la Juventud (“Island of Youth”) in the south and more than 4000 other small islands. Cuba is an island nation.

When we talk about Cuba, we usually mean the main island. What does the outline of the island remind you of? Maybe a crocodile?

Cuba’s location in the sea

The island of Cuba extends over 1200 kilometers from west to east. But it is only wide between 32 and 145 kilometers. The northwest is on the Gulf of Mexico. The capital Havana is also located here. The rest of the north coast lies on the Atlantic. The mainland, Florida in the US, is only 180 kilometers away from the north coast. Cuba’s south coast is on the Caribbean Sea.

Part of the Greater Antilles

Cuba belongs to the archipelago of the Greater Antilles. These include the islands of Jamaica, Hispaniola (with the states of Haiti and Dominican Republic), the Cayman Islands (Cayman Islands, part of Great Britain) and Puerto Rico (part of the USA).

Cuba is a rather flat country with many lowlands. Especially the middle of Cuba has such levels. Here is sugar cane grown. For this purpose, the tropical rainforest that used to grow here was completely cut down.

The east of Cuba, on the other hand, is mountainous. The most important mountain range is the Sierra Maestra, which also includes Cuba’s highest mountain, the Pico Turquino with a height of 1974 meters. The easternmost province is called Guantánamo. It’s very dry here. The name Guantánamo is mainly known to us from a prison camp in the USA (see the history of Cuba under the Platt Amendment ).

In the far west of Cuba is the province of Pinar del Río. In the middle there is a small mountain range that you can see on the map. It is the Guaniguanico massif. It consists of two mountain ranges. The northern one is called Sierra de los Organos and has fertile valleys like the Valle de Viñales. It is considered the most beautiful landscape in Cuba. There are also Kegelkarst mountains here. They are also called mogotes. They were created because lime dissolved out of the fields. Today they protrude from the plain overgrown with greenery as you can see in the picture on the right.

Cuba has extensive mangrove forests on the coasts. Of course, there are also white beaches with palm trees in Cuba. But the landscape is more diverse than just that!

Cuba is located in the tropics and is influenced by the trade winds. The sun shines here almost every day. Snow never falls here! There are no seasons either. A distinction is made between a rainy and a dry season. It rains a little more between May and October than in the dry months of November to April. But there are rather short warm showers and no continuous rain.

The average temperature in Havana in January is 23 degrees, in July it is 27 degrees. It rarely gets colder than 10 degrees here. Nobody needs winter shoes here! In the mountains it is a little cooler the higher you go. The hottest is the southeast corner of Guantánamo Province.

Hurricanes can occur from June to November. These tropical cyclones are very powerful and can cause homes to collapse. Streets are being flooded or even washed away entirely. People also keep dying in hurricanes.