Where is Croatia located on the map? Croatia is an independent nation located in Southern Europe. Check out the following images to see location of Croatia on maps. 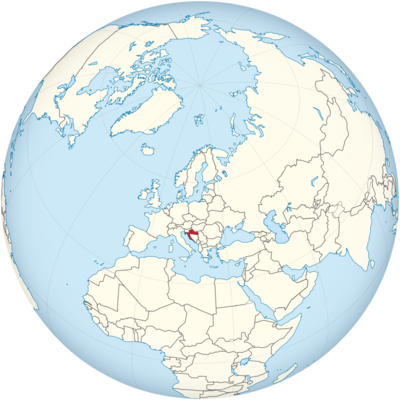 The Republic of Croatia is located in south-east Europe and is one of the Balkan states. Countries bordering Croatia are Slovenia in the northwest, Hungary in the north, Serbia in the northeast, Bosnia and Herzegovina in the east and Montenegro in the southeast. The national territory covers 56,000 square kilometers.

Croatia is roughly as big as the federal states of Baden-Württemberg and Rhineland-Palatinate combined. A little over 4 million people live there.

A special feature: In Croatia there is an exclave in the very south, i.e. an area that belongs to Croatia, but is separated by another country, in this case Bosnia and Herzegovina. This area is the region around the city of Dubrovnik.

On this map you can see where Croatia is in Europe.

Croatia: country of islands and mountains

Croatia has a 1778 km long coastline and more than 1200 islands are offshore. But only a few of them are inhabited. The largest Croatian islands are called Krk, Cres and Brač.

Croatia is divided into three larger landscape regions: On the one hand there is the coast of the Adriatic with its many small and larger islands. It can be subdivided from north to south into the regions of Istria, Kvarner Bay and Dalmatia. The Adriatic coast is joined to the east by the Dinaric Mountains. In the north and northeast is a lowland that belongs to the Pannonian lowlands.

The landscapes of Croatia are very varied. Lonely and rugged gorges, deep river valleys and a beautiful, rugged coast with fantastic beaches characterize the country. The karst landscape is typical of Croatia. This is permeable limestone that is malleable. The result is strange rock formations that create wind and rain.

The interior of Croatia has a continental climate. In summer the mean temperatures are 28 degrees, in winter they sometimes drop below zero degrees, on average they reach around five degrees Celsius.

On the coast it is a bit warmer, here the temperatures are mostly around 30 degrees, this is known as the Mediterranean climate. The sun shines very often on the coast and a lot of rain can fall in winter. However, the temperatures remain quite mild. The further north you travel in Croatia, the colder it gets. In winter the Bora blows on the coast, a particularly stormy wind that brings cool temperatures with it.