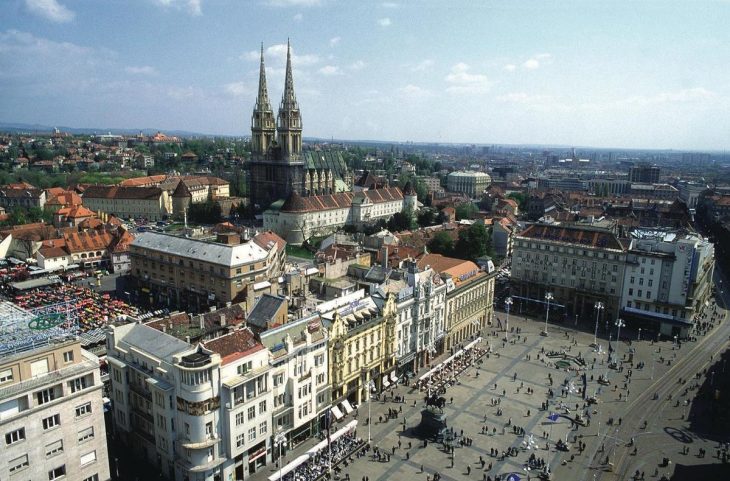 Zagreb is the capital of Croatia, by the river Sava. The city has 804 507 residents (2018). Zagreb is a transport hub and cultural center with significant industry. The city is a center for the country’s five major highways.

Zagreb Franco Tudman International Airport is in Velika Gorica, 14 kilometers southeast of the city. It is the country’s largest airport. In 2018, 3.4 million passengers traveled to or from this airport.

There is a Norwegian embassy in the city.

The most important industrial activities are electricity production, chemical and pharmaceutical industry, textile and food industry. The chemical industry is partly based on oil and natural gas fields in the area.

Zagreb University, founded in 1669, is the oldest and largest in the country with a total of 75,000 students. In the city there are also several colleges. Zagreb is known for its many museums. There are museums for archeology, ethnography and art, including modern art, as well as a city museum and the country’s historical museum. Zagreb also has opera, botanical and zoo. Since 1972, an international animation film festival has been held in the city. This is the world’s second oldest animated film festival. The festival was held every other year until 2005, but has since then been held on an annual basis. The city is the seat of Roman Catholic and Greek Orthodox Archbishop.

The city is divided into three parts: Kaptol (upper town), Donji grad (lower town) and Novi Zagreb (suburb, built after 1957). The Kaptol is built like an amphitheater. In this district are the Presidential Palace, Parliament and several museums, as well as the Cathedral of St. Stephen, which began in 1093, and the Archbishop’s Palace, which was built in the period 1723-1748. The regular Donji Grad at Sava is built after 1800. Here is the National Theater in New Baroque style and also several museums. On the right bank of Sava lies the suburb of Novi Zagreb, where many international trade fairs have been organized.

Zagreb, founded in 1093 as a bishopric, became the capital of the Arpadian dukes. After the destruction of the Mongols in 1242, the city was rebuilt and made into a royal Hungarian sanctuary. In 1718–1918, Zagreb was the capital of Croatia-Slavonia.

An earthquake of strength Mw 5.3 and with epicenter seven kilometers north of Zagreb took place on March 22, 2020. The earthquake resulted in personal injury and damage to buildings, including the cathedral in the capital.