Where is Comoros located on the map? Comoros is an independent nation located in Eastern Africa. Check out the following images to see location of Comoros on maps. 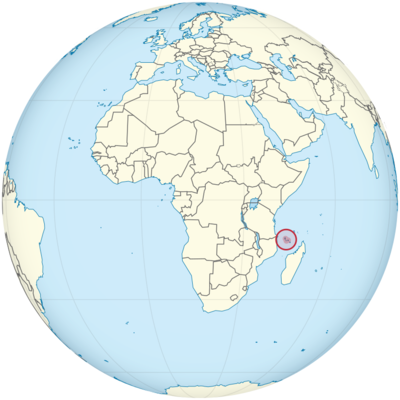 You can find the Comoros in the Indian Ocean between the east coast of Africa and the island of Madagascar. If you were to head straight for Africa by ship from the Comoros, you would land in Mozambique. If you don’t get lost.

The Comoros are an archipelago made up of four main islands, with only three of the four islands belonging to the Union of Comoros. The fourth main island belongs to France. The area of ​​the island state is 1862 square kilometers.

The following islands belong to the Islamic Federal Republic of the Comoros :

Why are the islands called “moon islands”?

The name of the islands is of Arabic origin and means “lunar islands”. If you take a close look at the three islands on the map (ideally click on the photo and enlarge it) and connect them in your imagination, then a moon-like structure is actually created.

The fourth island of Mayotte does not belong to the Comoros state, but to France. However, the Comoros also lay claim to this fourth island. This can be seen in the country’s flag, which is made up of the individual flags of all four islands.

Volcanic origin of the islands

All Comoros islands are of volcanic origin. Mountains run through the islands, which are characterized by hilly landscapes, but also rugged mountains and plateaus. The highest mountain in the Comoros is a volcano called Karthala and it is located on the largest island. This reaches a height of 2361 meters. By the way, the volcano is still active. There are no more volcanoes on the smallest island of the Comoros, Mwali. The capital of the Comoros, which is called Moroni, is on Nyazidja.

Most of the people live on the central island of Nzwami. There is also a lot of water and a large crater lake. The coasts of the islands are very rugged and white beaches lie between the rocks. A species-rich fauna lives in the waters. But the tropical climate also brings cyclones with it that sweep over the islands.

Here you can see the location of the Comoros.