Where is Colombia located on the map? Colombia is an independent nation located in South America. Check out the following images to see location of Colombia on maps. 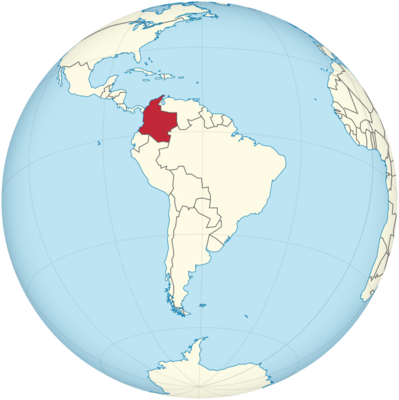 Colombia is the northwesternmost country of South America. It is connected to Central America through the border with Panama. There are other national borders with Venezuela, Brazil, Peru and Ecuador. Colombia is the only country in South America to have access to the Atlantic and Pacific. Both coasts are quite long with more than 1400 kilometers. The Atlantic coast is also called the Caribbean coast because the Caribbean Sea is located here as part of the Atlantic.

Colombia is located in the northwest of South America.

Why is Colombia called Colombia?

In the Spanish spoken here, Colombia is called Colombia, by the way. The country was named after Christopher Columbus.

Colombia is a big country. It is more than three times the size of Germany. According to its landscapes, it can be divided into five large natural spaces. You can see this on the map on the right. The Andes are brown, the Caribbean lowlands are yellow, the Pacific lowlands are purple, the Amazonia is dark green and Orinocia is light green.

The Andes run from north to south. The Andes are a very long mountain range that runs through the entire western half of South America. Three mountain ranges can be distinguished within the Andes: the western, central and eastern cordillera. This three-way division is also present in Colombia.

The two longest rivers in the country flow into the Caribbean Sea between the mountain ranges: the Río Cauca (1180 kilometers) and the Río Magdalena (1538 kilometers). In a valley of this river, the Tatacoa Desert lies in a dry basin. In the mountains are also the largest lakes in the country as well as the largest cities: Bogotá, Medellín and Cali.

There are also several volcanoes in the mountains. In the far south is the Galeras volcano, which is still active and erupted in 2009 and 2010. The Nevado del Huila volcano, also in the south of the country, is still active.

In the far north, however, lies the Sierra Nevada Santa Marta, which belongs to the Central Cordillera. Here are the two highest mountains in the country: The Pico Cristóbal Colón and the Pico Simón Bolívar are both 5775 meters high. Pico means summit in Spanish.

The Caribbean coast forms a lowland. The cities of Barranquilla, Cartagena de Indias and Santa Marta are right on the coast. The hinterland itself is very sparsely populated. There are large swamps here. The northeastern tip of the country is the Guajira Peninsula (whose southernmost strip belongs to Venezuela). It’s very windy and dry here.

The Pacific lowlands are also sparsely populated, where they are particularly hot and humid. Impenetrable tropical rainforest grows here. The rivers, such as the Río Atrato, are almost the only traffic routes. The cities of Buenaventura and Tumaco are located directly on the coast.

The southeast of Colombia forms the Amazonia region. The Amazon river touches Colombia only in its southeastern corner as a border river to Peru, but many rivers in this area flow towards the Amazon. Thick rainforest covers the country. Only a few indigenous people live here. The equator runs through this area through Colombia.

The northeast of the country is also called Orinocia, because the rivers here flow in the direction of the Orinoco, for example the Río Meta or Río Guaviare. The Orinoco is the border river to Venezuela, through which it flows over two thirds of its length. Because the land here is flat, it is also called the Eastern Plain ( Llanos Orientales ). Few people live in this region either.

In both the Caribbean and the Pacific there are islands that belong to Colombia. In the Caribbean Sea this is the archipelago of San Andrés and Providencia, to which, in addition to the two islands of the same name, a few more belong. The archipelago is 770 kilometers from mainland Colombia, but only 200 kilometers from Nicaragua. Much closer to the mainland are Fuerte and Tortuguilla and other small islands. Tierra Bomba is bigger, where 9000 people live.

500 kilometers from the mainland is the island of Malpelo with several smaller islands. Malpelo is uninhabited and can only be visited with permission, for example from researchers.

Gorgona – only 35 kilometers from the mainland – is also uninhabited. Gorgona was a prison island between 1960 and 1983 and was home to the most dangerous criminals in the country. The island has been a national park since 1984 and has been declared a UNESCO World Heritage Site. Here you can hear the song of the humpback whales!

The climate in Colombia is tropical. In the south the equator runs through the country. There are no seasons, the temperatures are about the same all year round. The difference from the hottest to the coldest month is just one degree. The difference within a day is greater than the difference in the year, for example 5 degrees in the morning and 17 degrees in the afternoon. More than three quarters of the country is in the hot zone (below 900 meters).

The higher you get in the mountains, the cooler it gets. Most people in Colombia live in the temperate and cold climates, that is, at altitudes between 900 and 3000 meters. From an altitude of 3000 meters, the climate becomes alpine, i.e. rather cool, like in the mountains. Forest becomes individual trees and finally grasslands. This grassland zone is called Páramo. From 4,000 to 5,000 meters above sea level, snow and ice cover the mountains all year round.

Instead of seasons, a distinction is made between rainy and dry seasons. In Colombia there are two of them. The first rainy season is in April / May and the second in October / November. In between are the dry seasons, i.e. December to March and June to September.

It is drier on the Caribbean coast than in other parts of the country. Most of the rain falls west of the Andes, on the Pacific coast. It is particularly hot and humid here.