Where is Chile located on the map? Chile is an independent nation located in South America. Check out the following images to see location of Chile on maps. 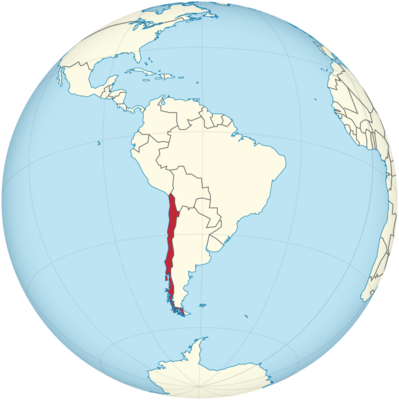 Chile is in South America. Like a long narrow band, it occupies the southwest of the continent. In the north of the country there are deserts, in the middle there is a Mediterranean climate (i.e. similar to the Mediterranean) and in the temperate and humid south of Chile there are even glaciers! The Andes, the mountain range that runs through all of South America, run through the country.

To the west lies the Pacific. Chile has a very long coast here. The country stretches 4300 kilometers from north to south. That is as far as from Denmark to the Sahara of Africa! On the other hand, Chile is wide in some places only 180 kilometers and a maximum of 440 kilometers.

Chile has a rather short land border with Peru, a slightly longer one with Bolivia and a very, very long one with Argentina. Chile has also claimed part of the Antarctic since 1940. However, this claim is not recognized internationally.

What does the name Chile mean?

There are several interpretations of what the name Chile means. In any case, it has nothing to do with the chilli pepper. The name probably comes from the Aymara language. This Indian people still lives today in the border area of ​​Bolivia, Peru and Chile. In their language, chili means : land where the world ends.

In the north of Chile is the Atacama Desert, which continues to Peru. It is about 1200 kilometers long and extends over the mountains and the central valley. The Atacama Desert is one of the driest areas on earth. During the day it can be 30 degrees and at night the temperature drops to minus 15 degrees… brr! There are several salt lakes in the desert, of which the Salar de Atamaca is the largest.

There are many volcanoes in Chile and major earthquakes occur again and again. This is due to the fact that three tectonic plates meet here. The volcanoes run through the country in a series from north to south. In the north they reach heights of more than 6000 meters. One of them is the Ojos del Salado, the highest mountain in Chile at 6,893 meters. It is the highest volcano on earth and the second highest mountain in South America. In the south, the mountains and volcanoes are much lower at 2000 to 3000 meters.

Many islands are in the sea in southern Chile and the coast is rugged. Separated from the mainland by the Strait of Magellan is Tierra del Fuego with its many islands. Chile shares the largest island with Argentina. Punta Arenas, Chile’s southernmost city, is still on the mainland. The southernmost point of Chile and South America, on the other hand, is on the island of Isla Hornos and is called Cape Horn.

Easter Island lies in the middle of the Pacific – more than 3,500 kilometers from mainland Chile. Easter Island is a volcanic island, but its volcanoes are no longer active. About 5800 people live here. Easter Island is best known for its large stone statues. There are several hundred of these figures, called Moai, on the island. On average they are 4 meters tall, but there are also figures 10 meters high and one is even 21 meters high.

Most of the moai originated between 1400 and 1600 AD. They originated as part of larger facilities where residents held ceremonies when someone died. It is believed that the figures represent chiefs. They then guarded the deceased. From one day to the next, the construction of the statues was finished. The tool was even found next to the unfinished moai. Why you don’t know, you suspect a quarrel among the residents.

Since Chile is in the southern hemisphere, the seasons are the opposite of ours in Europe. Summer begins in December, winter in June. January is the hottest month and July is the coldest. Because Chile stretches so far from north to south, the climate is also very different.

In the far north, the Atacama Desert is very dry. It gets very hot during the day and freezes at night. In the north of the country, the Andes are particularly high with peaks over 6000 meters high. The higher you get here, the colder it gets. The northern part of the country is called “Great North”. In Antofagasta, a town on the edge of the Atacama Desert, the average annual temperature is 16.7 degrees. There is almost no rain here.

The semi-arid climate in the “Little North” forms a transition zone. The central part of the country, where Santiago de Chile is also located, then has a climate similar to that of the Mediterranean. This is the green area on the map. Most of the people live here too. The average annual temperature in Santiago is 14 degrees. Rain falls mainly between May and August, i.e. when it is winter here.

This central zone is followed by the “little south”, which is marked in red on the map. The rain is increasing. Forest grows here. So the “Big South” (purple) is still missing. Southern Chile is part of Patagonia. It is very sparsely populated. In Punta Arenas the average annual temperature is 6.7 degrees. So it’s pretty cool. It rains fairly evenly all year round. Here you can find glaciers.

The Humboldt Current has an impact on Chile’s climate . This is a cold ocean current that pulls north from Antarctica past South America’s west coast and only drifts off before Ecuador. It also brings cool air to Chile and is responsible for the great drought in northern Chile. The cooled air can only absorb a little moisture and it evaporates immediately when it hits the warm coast.