Where is Belgium located on the map? Belgium is an independent nation located in Western Europe. Check out the following images to see location of Belgium on maps. 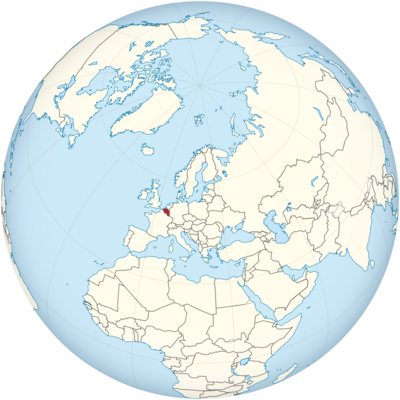 Belgium is located in Western Europe and borders the Netherlands, Germany, Luxembourg and France. Around eleven million people live on 30,528 square kilometers. Belgium roughly the same size as the state of North Rhine-Westphalia.

The country is divided into the north, where the Flemings live, who speak Dutch, and the south, with the Walloons, who speak French. In the east, a small group of people speak Standard German.

Most of the land is pretty flat. Only in the south-east, in the area of ​​the Ardennes, is it a bit hilly. The Ardennes are a mountain range with a lot of forest, meadows and water. The highest mountain in Belgium lies in the south and is the Botrange with a height of 694 meters. This mountain can be found in a high moor area.

The longest river in Belgium is the Meuse, which reaches a total length of 925 kilometers. 183 kilometers of it flow through Belgium. Another river is the Scheldt. Belgium has access to the North Sea. The coastline is about 70 kilometers.

The Atomium in Brussels

The Atomium in Brussels is a 102 meter high construction made of nine huge steel balls. These balls symbolize the atoms of an iron molecule. At the top you can even go out to eat in a restaurant. The Atomium was built on the occasion of the world exhibition that took place in Brussels in 1958. The building is particularly nice to look at in the evening, when it is illuminated.

The climate in Belgium corresponds to the climate in Western Europe and is determined by the sea. If you look at the map (above) you can see that Belgium is on the coast. In this way, cooler sea air flows into the land. The rain is evenly distributed throughout the year. The average temperatures are between 15 and 24 degrees in summer and -2 to + 5 degrees in winter.