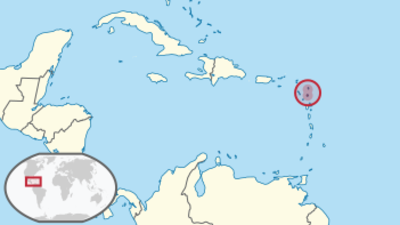 Antigua and Barbuda are two islands in the Caribbean . Together they form a state. So you are an island nation. They border the North Atlantic in the north and east and the Caribbean Sea in the south and west.

Both islands belong to the Lesser Antilles archipelago. These are in turn divided into the northern “islands above the wind” and the southern “islands below the wind”. Antigua and Barbuda are among the “Leeward Islands” that get more wind and moisture than the southern islands. The state also includes the island of Redonda, which is uninhabited, and several very small islets.

Antigua is the larger of the two main islands. The capital Saint John’s lies on it. Most of the population live in Antigua. Antigua arose because hard corals settled on a former submarine volcano. This led to the deposition of limestone.

The highest mountain on the island is the remnant of the volcano or the former volcanic crater. It’s called Mount Obama and is 402 meters high. It was called Boggy Peak until 2009 and was renamed in honor of former US President Barack Obama.

Barbuda is 48 kilometers north of Antigua. Only 1800 people live there. The main town is Codrington. Barbuda is a coral reef and therefore very shallow. In the west of the island there is a large lagoon.

Both islands have a rugged coastline with many lagoons and bays. Because of its many beaches, Antigua and Barbuda is also known as the “Land of 365 Beaches”.

Location of Antigua and Barbuda in North America

Antigua and Barbuda are in the tropics. It is warm all year round, an average of 27 degrees. It is coldest between December and February with around 23 degrees, and the warmest in July and August with around 30 degrees. Because the differences are so small, there are no seasons here. A distinction is made between rainy and dry seasons. Most of the rain falls between September and November, the least in February and March. Hurricanes can occur between June and November.