Where is Angola located on the map? Angola is an independent nation located in Central Africa. Check out the following images to see location of Angola on maps. 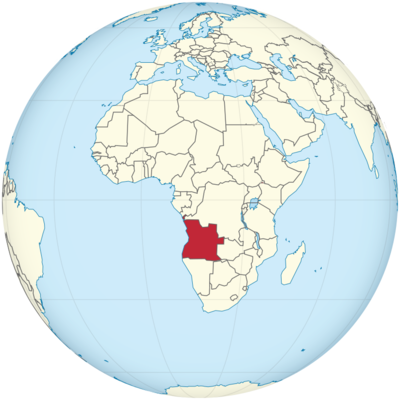 Angola is located in the southwest of Africa and is quite large. With 1,246,700 square kilometers, it is the seventh largest country on the African continent. Germany would fit in about three and a half times!

The west of Angola is bordered by the Atlantic Ocean , the north by the Congo and the Democratic Republic of the Congo – these are two different countries, even if they have almost the same name. Zambia is to the east and Namibia to the south.

Here you can see the location, size and border states of Angola on the map.

If you look at Angola on the map, you will see the long coast of 1600 kilometers. A lowland with a width of up to 150 kilometers connects to the coast. In the south lies the Namib desert.

The country rises to the east, away from the coast, further up to a highland, the highlands of Bié, which takes up most of the area of ​​Angola. You’ll find that pretty much in the middle of the satellite map. To the west of it is the highest mountain in the country, the Morro de Moco, which is 2619 meters high, in the midst of other high mountains.

In the east of the country, the dry savannah is decisive. In addition to the coasts, the savannahs primarily determine the land. And in the far south the country turns into a desert landscape that extends into the north of Namibia. It’s best to click once on the map and enlarge it.

The longest river in the country is the Kunene with a total of 1200 kilometers in Angola and Namibia. It rises in the mountain range in which Angola’s highest mountain is located. The Cuanza also has its source here. It is 965 kilometers long and flows into the sea at Luanda. Another well-known African river, the Okavango, also comes from the highlands in Angola. However, it still bears the name Cubango here. This river does not flow into the sea like most rivers, but at some point seeps into the Botswana deserts.

Mussulo is the name of a long and narrow peninsula off the coast near Luanda. The major cities of Angola are also on the coast. In addition to the capital, Luanda, these are Benguela and Lobito.

There are three major climates in Angola. The climate on the coast and in the north is tropical. The temperatures are between 25 and 30 degrees all year round. The rainy season is from November to April. In the period from June to August there is no rain at all. The climate changes towards the south coast and there are greater temperature differences.

In the highlands in the middle of the country and in the south there are greater temperature differences between day and night, especially in winter. In the south there is almost no rain, only in November and April you have to reckon with about three rainy days a month. The rest of the time it rains a maximum of once a month, so very little.

In the southeast it is hot and dry. Here it gets around 27 degrees from November to July and in September the temperatures sometimes rise to 31 degrees. At night it is much cooler, in July and August the temperatures can reach eight degrees. The rainy season starts here in October and it rains most in December.